As we mentioned last week, the House Judiciary Committee has scheduled its hearing on SB 95, which enables public bodies to continue to meet remotely as they have done under Emergency Order #12 during the pandemic. The hearing is scheduled for this coming Tuesday, May 4, at 9:00 a.m.

We have heard from many local officials about how well remote meetings have worked, and we have heard almost no complaints. Those benefiting the most seem to be not the board members themselves, but members of the public who are able to attend and (if permitted) participate in meetings from their own homes or elsewhere. We do expect that most local boards will return to in-person meetings once it is safe to do so, but it certainly would be helpful to have the remote meeting option when circumstances warrant it—not only during a statewide emergency.

We hope SB 95 will be viewed more favorably. In the interest of caution, the Senate included a sunset date of July 1, 2022, in the bill, essentially establishing a “probationary period” for remote meetings. After that date, the remote meeting option would disappear unless the legislature reauthorizes it. In the meantime, the bill creates a legislative committee to study remote meetings and make recommendations to the legislature. We think this is a prudent approach.

Local officials who would like to continue to have the remote meeting option are strongly encouraged to register in support of SB 95 using the House remote testimony form, or sign up to testify at the hearing on Tuesday. Please let us know if you have questions about the sign-up process.

The Senate Finance Committee will hold two public hearings on the state budget on Tuesday, May 4, at 1:00 p.m. and 6:00 p.m. Members are encouraged to provide testimony about how the budget and the potential for additional (or reduced) state aid and revenue sharing could affect your town or city.

Under the House-approved budget, municipal aid and revenue sharing are currently projected to be $50.1 million* less than the current biennium (see chart below).  *Note:  Meals and rooms tax distributions would be $10 million less than what is “allowed for” in the operating budget based on the current fiscal year 2021 meals and rooms tax revenue projection that is less than the fiscal year 2020 revenue.  The following is where things stand right now in terms of funding for cities and towns:

There are 113 enrolled municipal bridge projects through 2028—which include 66 of the current 223 “red list” bridges (2020 Red List Report issued 3/22/21). Enrollment is currently frozen with a waiting list.

There are also four revenue-related bills for municipalities on the Senate table which can now be considered for inclusion in the state budget.  These bills are discussed in detail in the article below.

The House budget makes a one-time $100 million reduction in the Statewide Education Property Tax (SWEPT) for fiscal year 2023.  This would reduce the state education portion of the total property tax by approximately 28% for all taxpayers in fiscal year 2023 only.  HB 2 also provides that those municipalities whose education grants are decreased due to the SWEPT reduction will receive a separate supplemental educational payment from the state.

Municipal officials are strongly encouraged to testify at the remote public hearings, or submit written testimony addressing concerns and needs specific to your municipality.  As always, please let NHMA know of any testimony you plan to offer, and let us know if you have any questions about how to sign up or testify.

As we have reported, there are four very important bills regarding municipal aid and revenue sharing that were laid on the Senate table last month.  These bills can now be considered for inclusion in the state budget.  We encourage municipal officials to include the important local benefits of these bills in your budget testimony (see above) to the Senate Finance Committee.  The bills are:

Actions to restore state aid and revenue sharing, which these bills represent, are an opportunity to begin to relieve the property tax burden that has been subtly downshifted to the local level as these statutory aid programs were decreased and eliminated—and never restored to the pre-2010 levels, even after the state fully recovered from the 2008-09 recession.  Please send your testimony to the Senate Finance Committee explaining how your town or city and its taxpayers can benefit by the restoration of this state aid and revenue sharing. 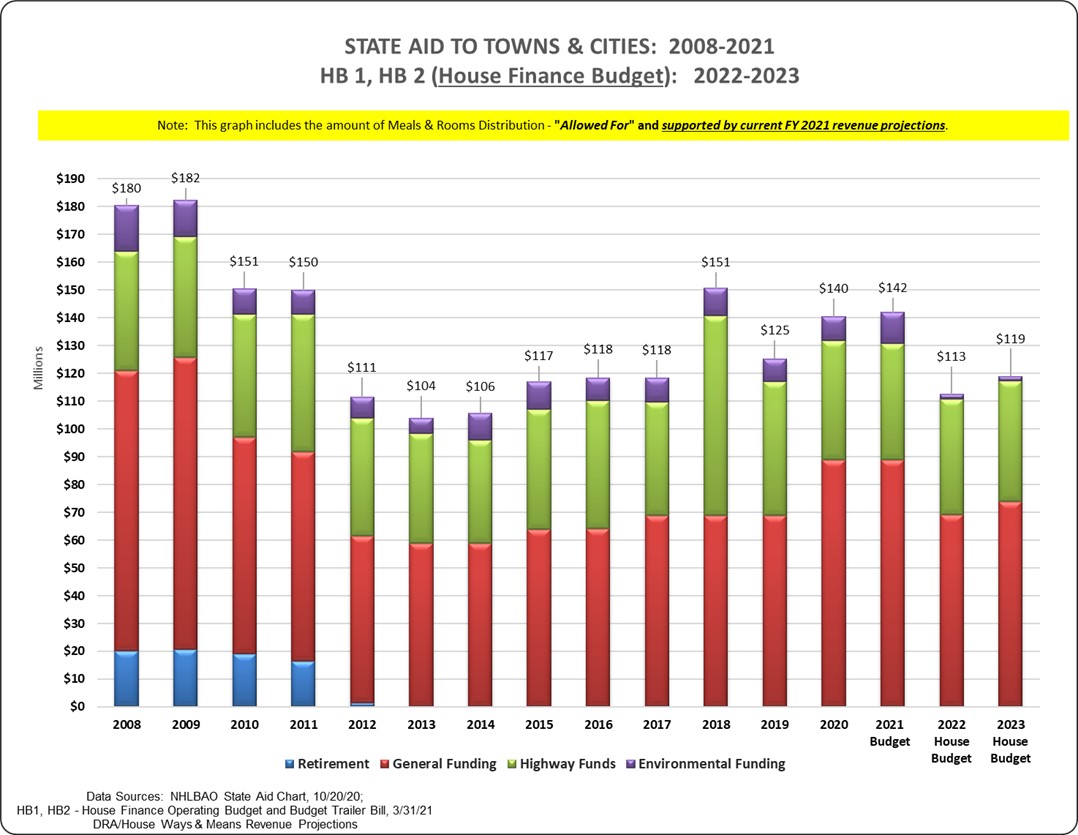 To assist municipalities and their elected officials as you review the municipal funding in the current state budget, we have included a link here to NHMA’s publication “Municipal State Aid and Revenue Sharing – History & Trends”.  In applying the loss and/or reduction of state aid to your individual municipality, the following are offered as tools.

In unexpected action Wednesday, the Senate Executive Departments and Administration Committee voted 4-1 to recommend Ought to Pass on HB 141, which would allow counties (in addition to municipalities, already allowed) to exempt their chief administrative officers from compulsory participation in the state retirement system. Of concern, the bill requires any county or municipality choosing this option to pay into the retirement system an annual employer contribution equal to the unfunded accrued liability rate for that “exempt” position. As an example, if a chief administrative officer’s salary is $110,000, the full employer contribution rate would be $15,466; the unfunded accrued liability amount required to be paid for the “exempt” position would be $12,287—nearly removing any incentive to the municipality or county to exempt this position.  The full Senate will act on this bill at its next session on Thursday, May 6.

As history, the original HB 141 related to maintaining a public registry of fire suppressant usage.  The first non-germane amendment replaced the entire bill with a new bill to allow counties to exempt their chief administrative officers from compulsory participation in the New Hampshire Retirement System. The sponsor explained the purpose was to allow a specific county to promote its corrections superintendent to chief administrative officer without the employee having to become a Group I retirement system member, forfeiting his/her previous 30+ years as a Group II member. The House committee subsequently approved a second non-germane amendment adding the requirement that counties and municipalities make annual employer retirement contributions for any such “exempt employees.”

NHMA opposed the second non-germane amendment because it would create new costs for any municipalities that exercise this choice in the future. Further, the bill makes an unprecedented requirement of certain employers to make contributions (81.2% of the total pension costs) for exempt employees. The additional costs effectively eliminate any financial, business-type incentive for a municipality (or county) to attract chief administrative officers from other organizations or states who may already be participating in a non-NHRS plan. Moreover, the additional costs come at the same time the overall employer contribution rates are set to increase approximately 20 percent effective July 1, 2022.

As a result of some confusion about the positions of NHMA and the Association of Counties (NHAC), the committee voted 4-1 to recommend Ought to Pass on the bill as amended. Both NHMA and NHAC oppose Section 2 of the bill, which imposes the new contribution requirement. NHMA is hopeful that a floor amendment will be offered to remove Section 2 of the bill so that counties will be able to exempt their chief administrative officers without new retirement costs being created for counties and municipalities that opt for this exemption.

Members are urged to contact their senators and request that they oppose the bill unless a floor amendment is offered to remove Section 2 of HB 141.

The Senate is making good progress on disposing of some of the troubling bills that made it through the House.

Non-disparagement clauses. Yesterday the Senate voted unanimously to kill HB 83, which would have prohibited the inclusion of a non-disparagement clause in any settlement agreement involving a municipality, school district, or other governmental entity. We opposed the bill because it would inhibit settlement of litigation, leading to increased legal expenses, and because there are many situations in which a municipality is already prohibited from discussing details of a lawsuit. Disallowing a clause that would impose a similar prohibition on the other party is unfair.

Thank you to members of the Senate Judiciary Committee, and all senators, for voting to preserve local control over settlement agreements.

Adoption of SB 2. The Senate Election Law and Municipal Affairs Committee voted unanimously this week to recommend killing HB 374, which would change the process for considering the adoption of the official ballot referendum (SB 2) form of town meeting. We have opposed this bill and have reported on it several times before. We believe that a fundamental change to the town meeting form of government is something that should be decided after a thorough and informed discussion among those voting. That is how it is done under current law, which provides that the vote is to take place at the town meeting’s business session; HB 374 would change that and require that it be voted on by official ballot.

We support the committee’s recommendation of Inexpedient to Legislate. The bill is on the consent calendar for the Senate’s session next week.

Amending petitioned warrant articles. The same committee voted unanimously to recommend killing HB 67, which would prohibit the amendment of a petitioned warrant article in an SB 2 town to “change its specific intent.” We also have opposed this bill and reported on it several times. The bill violates a basic principle of the legislative process, which is that once an article (or a bill) is submitted, it is subject to amendment by the legislative body. There is no reason for petitioned articles, whether in SB 2 towns or elsewhere, to be treated differently. If the petitioners do not want their article to be amended, they need to muster the votes to prevent it.

HB 67 is also on the consent calendar for next week’s Senate session, and again, we support the committee’s recommendation of Inexpedient to Legislate.

Because the vote was not unanimous, the bill is on the Senate’s regular calendar for next week. We would be happy to see the Senate support the committee recommendation of Inexpedient to Legislate.

On Wednesday the Senate Executive Departments & Administration Committee voted 4-0 to recommend Ought to Pass on HB 302. This bill, which NHMA supports, clarifies an ambiguity in the law and ensures that political subdivisions may use electronic records and signatures. Many municipalities have been moving toward an electronic—or even fully paperless—environment over the past several years to save money and increase efficiency, and the pandemic brought this issue front and center. This bill will go to the full Senate at its next session on May 6.

On March 23 the governor signed HB 383, permitting municipalities with semi-annual or quarterly billing to request an adjusted tax rate when a change of 15 percent or more in annual property taxes is anticipated.  NHMA supported this bill, which will allow any municipality affected by either (1) a change in adequate education grants or excess tax amounts, or (2) a change of 15 percent or more in the amount of all property taxes to be raised for the current year as compared to the previous year, to apply to the Department of Revenue Administration to adjust the “ ½  of the previous year’s tax rate” by an amount sufficient to collect ½  of the estimated increase or decrease in the city or town, school, or county taxes resulting from the change.  The new act, 2021 N.H. Laws Chapter 15, takes effect April 1, 2022.

HB 72, relative to ratification of amendments to the state building code and state fire code.  Re-referred.

HB 331-FN, relative to a forfeiture of personal property.  Inexpedient to Legislate.

HB 397, relative to permitting fees under the shoreland protection act.  Passed with Amendment.