A Census Complete Count Will Benefit Everyone in New Hampshire

It’s that time again. As required by Article 1, Section 2, of the United States Constitution, the Decennial Census will take place in New Hampshire and across the country early this spring.

For New Hampshire, the importance and impact of the Census is consequential. More than $3.7 billion in federal funds are allocated to New Hampshire based on census data. That includes everything from funding for Highway Planning and Construction, the Federal Pell Grant Program and Low-Income Home Energy Assistance to Block Grants for the Prevention and Treatment of Substance Abuse, and Water and Waste Disposal Systems for Rural Communities. Federal funds provide revenue for 30% of the state of New Hampshire SFY’s 2018-2019 State Budget appropriations.

Beyond federal funding, the census determines the allocation of congressional districts and the electoral college. The New Hampshire legislature will use the 2020 census data for redistricting--and undercounts in certain areas of the state may lead to inaccurate representation in the legislature and the Executive Council.

For New Hampshire’s thirteen city governments and two-hundred and twenty-one town or township governments, the importance of a complete count cannot be overstated. With a declining population and the overall aging of the existing population. ensuring that no one is missed can be a matter of survival for some communities.

According to census data, twenty-seven percent of the cities and towns across Maine, New Hampshire, and Vermont lost population between 1990 and 2017, and an additional 44 percent saw their population grow at an average annual rate that was less than the national average of 30.2 percent.

By rough calculation, each undercounted person in New Hampshire costs the state about $2,771 of lost federal funds annually. 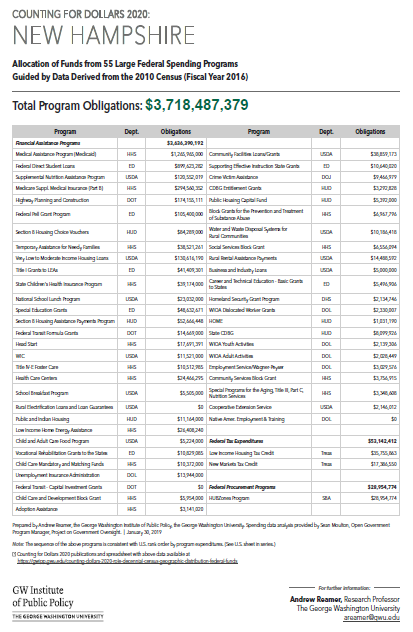 Not only are census allocated federal funds valuable to New Hampshire’s cities and towns but also businesses across the state rely heavily on the data derived from the census. This data “serves, at most companies, as the foundation for data-driven business decision making. It provides them with crucial demographic information about customers, the workforce and the economic landscape” according to the Business for the 2020 Census Task Force, an invitation-only network of executives from major corporations, national trade associations, and national business membership organizations.

While businesses may also rely on private, commercial databases, “the census data is the gold standard against which all other government and non-governmental data is compared,” says Ken Johnson, Senior Demographer at the UNH Carsey School of Public Policy. According to Johnson, “all the polling by corporations, commercial survey institutes, by government agencies depend on the census as the base to weight and adjust their findings to reflect the population. Even though they may not directly use census data its pervasive in all of the numerical tools that they rely on.”

Despite the importance of having a complete and accurate count, several factors will make getting everyone to respond to the census more difficult than before. One challenge of the 2020 Census is hiring enough staff to carry out the complex task of getting hundreds of millions of people to complete their census questionnaires. Historically low unemployment has made hiring hard; consequently, the base pay for census takers was raised to $20/hr for New Hampshire.

This will be the first census to allow online responses. While this should be a cost-saving innovation, another obstacle is the digital divide. In New Hampshire, a significant percentage of homes (especially in the North Country) still lack access to high-speed internet and mobile phone connectivity.

Why the Census is Important

Because Census data have countless applications in political, business, and social welfare arenas, Census accuracy is critical. Examples of the important uses of Census data include:

This is not just an issue for our northern neighbors and similar rural areas of the state. In Manchester, in the hardest-to-reach census tract, almost 27% of homes lack internet access. With 82 languages spoken in Manchester schools, reaching non-English speakers will present another hurdle. One of the most undercounted groups are children under the age of five. For different reasons, parents don’t always count their youngest children. The impact on funding for children’s nutrition and health programs due to an undercount could be devastating.

The politicization of the census by the current administration and aggressive immigration enforcement by federal agencies have created an atmosphere of fear and mistrust. Outreach to vulnerable populations and those who fear the government should take place by trusted community representatives.

Additionally, with the transition to an online response option, data security has become another trust issue for completing the census questionnaire. The census bureau has created a publication specifically addressing census data concerns.

To meet these challenges, Complete Count Committees (CCCs) have been organized in Nashua, Manchester, Rochester, Wilton, Claremont and Berlin, and the state government has organized a statewide CCC managed through the Office of Strategic Initiatives.

In the absence of state funding, the philanthropic community has stepped up to provide support to census activities in New Hampshire. Members of the New Hampshire Funders Forum have contributed funding for a part-time Complete Count Consultant and have created a small pool of funds to be allocated through a mini-grant program for outreach activities by nonprofits managed by Granite United Way. The business community has also been encouraged to address the resource gap needed to effectively meet the enormous challenge required for a complete count.

Across the state, public libraries, colleges and universities, community action agencies, economic development organizations and many others are becoming involved in the complete count efforts since all have a stake in ensuring high levels of participation.

In addition to in-person and online options, the census can be completed by phone. The Census will offer 12 different languages for responders. Federal Census staff will work with municipalities, libraries and non-profits to set up Mobile Questionnaire Assistance Centers across the state so anyone without internet access can respond to the census questionnaire.

How can cities and towns support the 2020 census? The U.S. Census Bureau has created the 32-page guide “2020 Census Toolkit for State and Local Officials” which details several actions that public officials can take to organize and publicize the census in their localities. The guide explains the crucial role of the CCCs which “serve as state and local ‘census ambassador’ groups that play an integral part in ensuring a complete and accurate count of the community in the 2020 Census. Success of the census depends on community involvement at every level. The Census Bureau cannot conduct the 2020 Census alone”.

But time is of the essence because the 2020 census has already begun. In the tiny northern arctic town of Toksook Bay, Alaska, traditional fishers and hunters began responding to the census on January 21st. In the lower 48 states, the census will begin in mid-March.

When the writers of The Constitution designed the census, it was with the intention to count everyone “once, only once, and in the right place.” Despite how much we have advanced since the first census in 1790, it will take old-fashioned people-to-people connections to reach the wide range of geographic, language and national identities who live in our state today. With public, private and community support, we can apply the “New Hampshire Way” to the goal of counting everyone.

Bill Maddocks in a 2020 Census Complete Count Consultant for New Hampshire.  Bill can be reached by phone at 508-574-3285 or by email at BillNHCCC@gmail.com.

Here is the Complete 2020 Census Calendar

March 12 - 20: Households will begin receiving official Census Bureau mail with detailed information on how to respond to the 2020 Census online, by phone, or by mail.

March 30 - April 1: The Census Bureau will count people who are experiencing homelessness over these three days. As part of this process, the Census Bureau counts people in shelters, at soup kitchens and mobile food vans, on the streets, and at non-sheltered, outdoor locations such as tent encampments.

April 1: Census Day is observed nationwide. By this date, every home will receive an invitation to participate in the 2020 Census. Once the invitation arrives, you should respond for your home in one of three ways: online, by phone, or by mail. When you respond to the census, you'll tell the Census Bureau where you live as of April 1, 2020.

May - July: Census takers will begin visiting homes that haven't responded to the 2020 Census to help make sure everyone is counted.

December: The Census Bureau will deliver apportionment counts to the President and Congress as required by law.

March 31: By this date, the Census Bureau will send redistricting counts to states. This information is used to redraw legislative districts based on population changes.