The State of Local Land Use Regulations in New Hampshire

RSA 675:9 establishes the New Hampshire Office of Strategic Initiatives (OSI) as the state repository for all local land use regulations and documents including master plans, zoning ordinances, historic district ordinances, capital improvement plans, building codes, subdivision regulations, historic district regulations, and site plan review regulations. RSA 675:9, which has been in effect
since 1983, also authorizes OSI to conduct an annual survey of all municipalities in order to collect information pertaining to new and/or amended land use ordinances. This article seeks to highlight the results of the 2018 survey, which was completed by all 234 municipalities as well as nine village districts with zoning authority and Coos County which has zoning authority over 23 unincorporated places in the North Country. In addition, this article contains data on zoning amendment updates submitted by 76 communities after their 2019 Annual Town Meetings.

The survey includes those municipalities that lack traditional zoning ordinances, as several have other types of land use regulations including residential subdivision regulations, non-residential site plan review regulations, a wireless telecommunications ordinance, sign regulations, and/or a drinking water protection ordinance. Several of the municipalities that lack traditional zoning ordinances are also participating communities in the National Flood Insurance Program and have separate floodplain development ordinances, which are tracked by our office’s State Floodplain
Management Program separate from this survey. 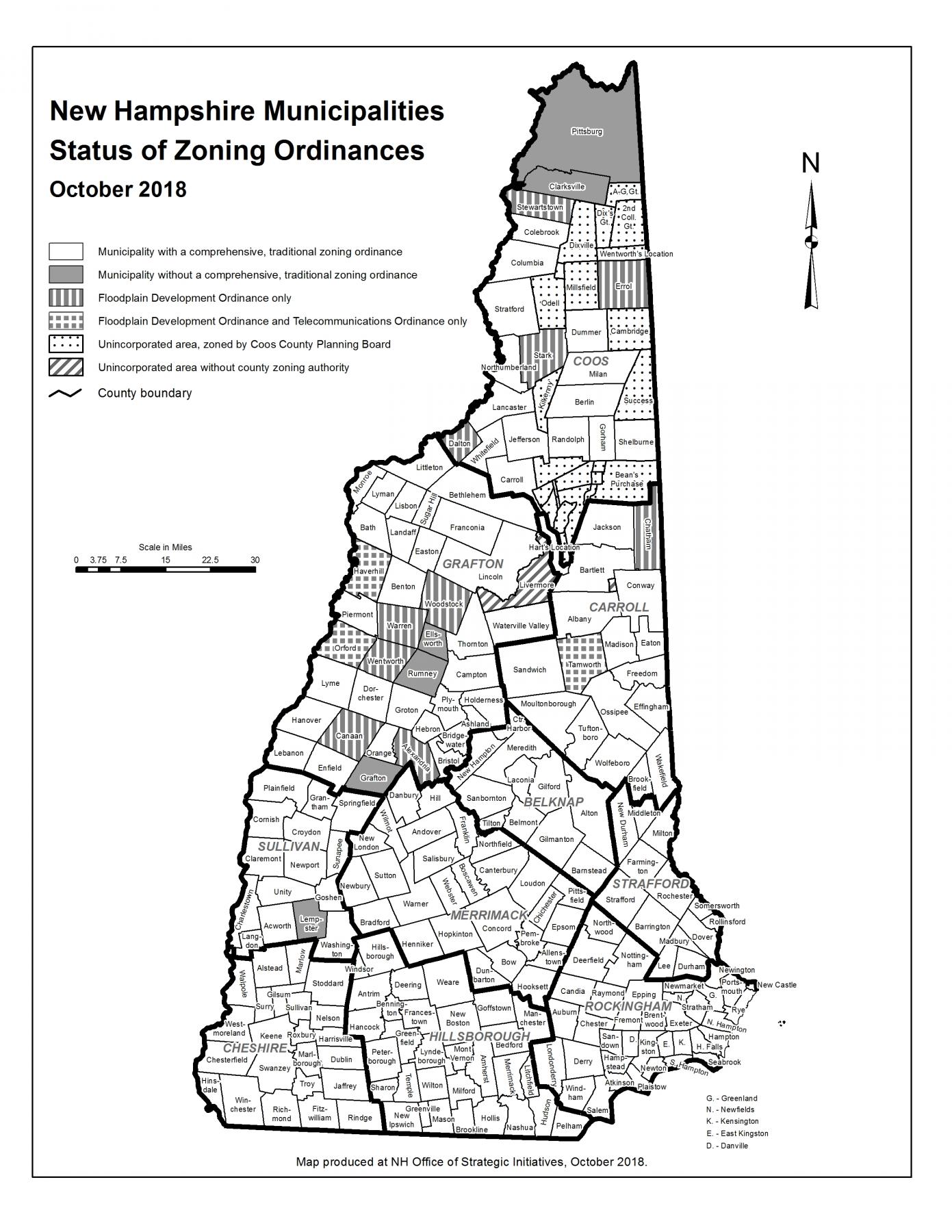 While 19 communities, located primarily in Grafton and Coos County, do not have traditional zoning ordinances, only two communities at the far northern tip of the state, Pittsburg and Clarksville do not have a Planning Board established under RSA 673:1. Furthermore, eight communities that lack a traditional zoning ordinance have a Zoning Board of Adjustment established under RSA 673:1 to administer appeals of other ordinances including floodplain development, telecommunications, and/or drinking water protection.

Among New Hampshire’s 234 municipalities, 71 communities explicitly allow workforce housing, including 22 communities who have workforce housing multi-family overlay districts in accordance with the state’s workforce housing law, RSA 674:58-61. RSA 674:58-61, which has been in effect since 2010, requires any municipality which exercises the power to adopt land use ordinances and regulations to provide reasonable and realistic opportunities for the development of workforce housing including rental multi-family housing in their ordinances and regulations. The majority of the communities that have adopted workforce housing ordinances are located in Southern New Hampshire and on the Seacoast, where housing-cost pressures are the greatest.
However, only 49 of these communities have an inclusionary zoning clause in their workforce housing ordinance which allows a developer to construct units at a greater density than otherwise allowed in exchange for setting aside a set percentage of units (usually between 10% – 20%) as affordable. RSA 674:58 defines workforce housing as housing which is affordable (i.e. housing costs do not exceed 30% of a household’s gross annual income) to 3-person household’s earning at or below 60% of Area Median Income for rental units and 4-person households earning at or below 100% of Area Median Income for ownership units.

The Town of Amherst has one of the most unique inclusionary zoning ordinances, titled the Integrated Innovative Housing Ordinance, which was adopted at Town Meeting in 2015, and seeks to “provide for and facilitate alternative approaches to development as provided in RSA 674-21 while protecting and preserving the rural aesthetic the Town has consistently valued” (Town of Amherst Zoning Ordinance, Section 4.16, March 2019). The ordinance appears unique in that it expressly tries to balance the diverse housing needs of the community with the rural nature of the community by providing density bonuses from 10%-30% not only for workforce housing as defined under RSA 674:58 and for seniors aged 55+ and 65+, but also for community space, open space, rental units, redevelopment of existing structures, and installation of public infrastructure.

At the same time, many of these same communities in Southern New Hampshire and the Seacoast also levy impact fees (86 communities) and/or have enacted growth management ordinances (25 communities). 80 communities also employ age-restricted housing regulations which typically limit residential development in certain areas to persons over age 55 or 62.

The Town of Chester adopted an Age-Friendly Subdivision Ordinance at Town Meeting in May 2019, in accordance with RSA 674:21 to accommodate persons of all ages. The Age-Friendly Ordinance seeks to, “provide an alternative to encourage builders to build the housing types that meet the needs of Chester’s citizens. These age friendly neighborhoods are envisioned
to consist of smaller, affordable, low maintenance homes for all people regardless of age, ability, or disability. Lots twelve acres or greater in size may be developed under this article, however, to
prevent fundamentally altering the rural character of Chester and to ensure that age-friendly subdivisions blend with existing development, the number of units per subdivision will be limited and shall require the approval of a conditional use permit application by the Planning Board” (Town of Chester Zoning Ordinance, Article 7, May 14, 2019).

172 communities allow open-space residential cluster developments in accordance with RSA 674:21(I)(f) where homes are usually spaced closer together than allowed through a traditional
subdivision, in exchange for permanently protecting a percentage of open space. Open-space residential cluster developments typically require a minimum of 25-plus acres. 65 of these communities provide a density bonus for developments that conserve more than the minimum required amount of open space.

A few final notable observations from the 2018 survey include:

• Aside from use-based zoning, the most prevalent planning and development technique which communities in New Hampshire utilize is the regulation of signs. 215 out of 225 zoning jurisdictions have adopted some form of sign ordinance regulating type, size, lighting, content, etc.

• 160 communities have developed quantifiable performance based standards in their zoning ordinance, a flexible alternative to traditional use-based zoning which typically regulates site standards such as appearance in terms of maintaining community character, blocking of scenic views and intensity of use such as noise, light, odors, air quality, shadows, etc. Performance based standards have most commonly been adopted for the regulation of telecommunications towers/equipment and wind energy systems.

• Six communities including Dover, Enfield, Lancaster, Milford, Portsmouth, and Stratham have gone a step further and created form based codes for some or all of their community, which regulate
the character and physical form of an area rather than specific uses. As this article demonstrates, based on reported survey results, communities across the Granite State are increasingly utilizing innovative planning and zoning approaches to meet their communities’ current needs, while planning for a future in which the population continues to age and young families flourish, housing grows scarcer, the effects of climate change worsen, and development pressures build, requiring a rebalancing of the natural and built environments.

The complete results and full analysis of the 2018 Municipal Land Use Regulation survey are available at https:// www.nh.gov/osi/planning/services/mrpa/land-use-survey.htm.

EDITOR'S NOTE: Since this article went to print, the Town of Dalton adopted an Emergency Temporary Zoning and Planning Ordinance pursuant to RSA 674:24-29.

Noah Hodgetts is Assistant Planner with the New Hampshire Office of Strategic Initiatives (NHOSI). Noah can be reached by phone at 603.271.2157 or by email noah.hodgetts@osi.nh.gov.

September/October 2019
The New Hampshire Office of Strategic Initiatives – Planning Division: Where We Came From and What We Do
The State of Local Land Use Regulations in New Hampshire
The New Hampshire Flood Hazards Handbook for Municipal Officials: A New Resource to Help Your Community Prepare for, Respond to, and Recover from Floods
Is New Hampshire Ready for Complete Streets?
When is a House a Hotel?
Bills That Are Not Going Away
LEGAL Q&A: What Municipalities Need to Know About “Workforce Housing”
HR REPORT: RSA 159:26 Re-Revisited: New Superior Court Opinion Finds that Public Employer May, Through Employment Contract, Prohibit Employees from Possessing Firearms in the Workplace
NHARPC CORNER: Public Health Planning - A Sign of the Times
AFFILIATE SPOTLIGHT: New Hampshire Association of Regional Planning Commissions