In New Hampshire, there are currently over 300 miles of State-owned rail corridors that are available for a variety of uses throughout the year. In addition, there are a substantial number of rail corridors under municipal or private ownership.  Rail trails parallel major transportation corridors, connect community centers and provide a low-stress walking and biking option for both residents and visitors alike.  Despite the range of benefits that trails can bring, there are many challenges.  Given that rail trails do not receive the degree of state or federal attention as our roads and bridges, a wide variety of individuals and groups – at the local, regional and statewide level – have emerged organically over time and are coordinating to make the most of these transportation and recreational assets. 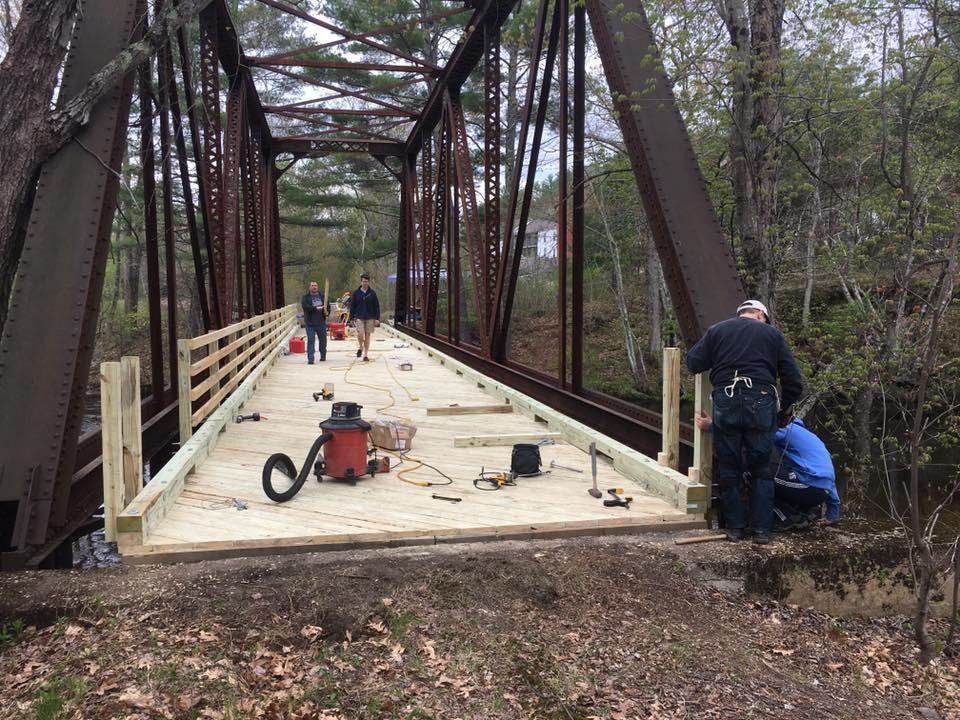 The benefits of rail trails are wide ranging, with various economic, environmental, transportation, health, and quality of life benefits widely cited by trail advocates and supported by research.

Many communities are interested in the economic benefits trails bring.  Trail users, both locals and visitors, patronize local businesses and new businesses sprout up along trails.  Benefits may be more subtle, such as when a company decides to move to a particular community due in part to amenities such as trails. Trails have also been documented to increase property values.  There are numerous studies nationally and locally to back claims of economic development. A study for the WOW Trail in Laconia estimates between $27.5 and $40.8 million in annual spending by out-of-town trail users.  Other studies have come to similar conclusions.  In 2017, Unitil commissioned a study of economic development opportunities for southern US 1 corridor communities which identified a rail trail on the abandoned Hampton Branch/Eastern Line as the most cost-effective potential economic catalyst for the region.  This said, perhaps the best argument in support of trails cannot be put into numbers.  Trails enhance quality of life, and any trail town will tell you that people love them.

Considerations for Communities Management of rail trails in New Hampshire varies. In many cases the New Hampshire Department of Transportation (NHDOT) owns the underlying corridor, though ownership may also be municipal or private.  In rural areas rail trails are often managed by the New Hampshire Trails Bureau with assistance from snowmobile clubs or other local volunteer groups. In suburban or urban areas, NHDOT will enter into maintenance agreements with host communities who in turn work on or coordinate with local trail organizations to mobilize volunteers for trash cleanup, mowing and brush clearing.  State and federal agencies have stepped in to fix heavy damage such as washouts from major storms.

The cost of maintenance is a key consideration for prospective trail communities, though usually local officials come to see how costs are balanced by the benefits – safe places to walk and bicycle for people of all ages and economic development potential.

Over time, many municipalities have started referencing existing or planned rail trails in local master plans. If a trail runs parallel to a major roadway, it should be identified as a transportation corridor with the potential to replace auto trips and improve safety for people walking and bicycling. This helps establish a nexus that better positions communities to negotiate with developers for trail construction and/or maintenance as part of off-site mitigation for development projects.  Site plan review and subdivision regulations can also be adapted to encourage or require new development adjacent to trails to connect to those trails, broadening local non-motorized access networks.  Local complete streets policies and their associated design guidelines are yet another opportunity to improve a community’s transportation options and connectivity. 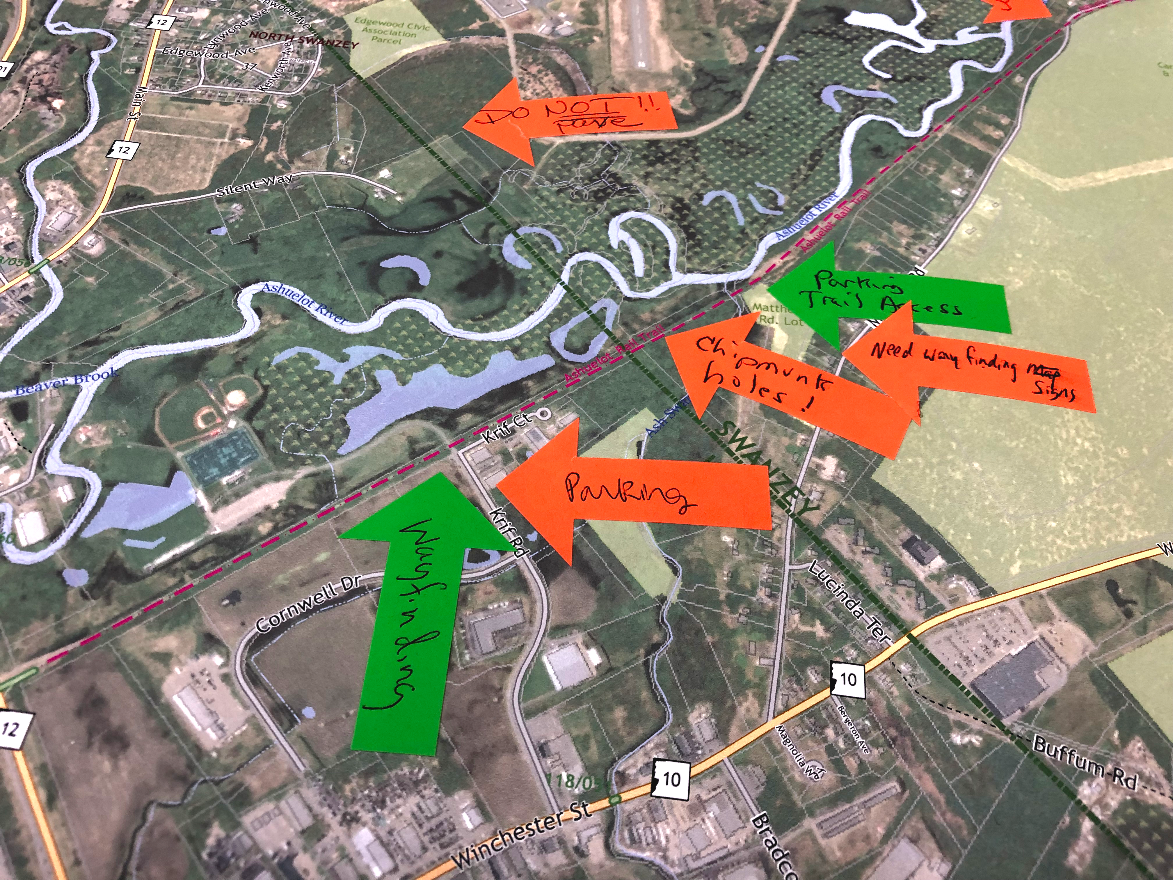 As in other regions, rail trails are considered an important part of the identity of the Monadnock Region.  Nearly half of the 34 communities in Southwest New Hampshire host a former railbed that is now used for walking, biking and more.  Altogether, Southwest New Hampshire hosts about 90 miles of rail trail representing over 25% of the State total.  The trails are also recognized as transportation assets by the Southwest Region Planning Commission’s (SWRPC) long range transportation plan: Southwest Connects.  However, a variety of challenges have prevented the trails from reaching their full potential.  SWRPC observed that trail stakeholder groups had priorities others were not aware of.  Moreover, trail stakeholders didn’t always see eye to eye on needed improvements.

In 2018 SWRPC reached out to the communities of Keene, Swanzey, Winchester, and Hinsdale along with various stakeholders and offered to facilitate a process to review challenges and prioritize solutions as part of the Plan for Ashuelot Rail Trail pilot project.  Staff and a project advisory committee developed a shared vision for the trail to be realized in part by identifying strategies and approximately 70 projects that would better promote the 21-mile trail and its use as an alternative to trips made by car, for physical activity and recreation, and as an economic asset.  The project also involved a dedicated webpage, survey and data collection, a public open house event, interviews with a variety of stakeholders, and more.  SWRPC plans to replicate this process for other sections of rail trail in the region.

Until recently, the 34-mile rail bed between downtown Concord and Lake Sunapee at Newbury Harbor had been abandoned for decades - chopped up into hundreds of properties with Interstate 89 built on top of portions of it.  Unlike State-owned corridors, this trail would need to be pieced back together. The solution to this challenge was to build a short trail in six communities including Concord, Hopkinton, Warner, Bradford, and Newbury.  Using this approach, each town would benefit from putting effort in the project regardless of when the rest of the trail would be completed.  The non-profit Friends of the Concord-Lake Sunapee Rail Trail organized the effort by building six different trails but using the same five simple rules for each:

Listen to residents and business owners,

Engage and involve people continuously and at every opportunity.

As part of the effort, the Central NH Regional Planning Commission has helped communities connect the dots by developing and implementing local master plans, assisting with outreach and interagency coordination and developing a regional trails plan document with a vision for the corridor.

Today, five of the six communities have trails built and are experiencing their benefits.   With these successes, the heavier lifts of building the more challenging sections appear more feasible, grant money and donations are flowing, and importantly, inspired property owners have donated easements for the trail. 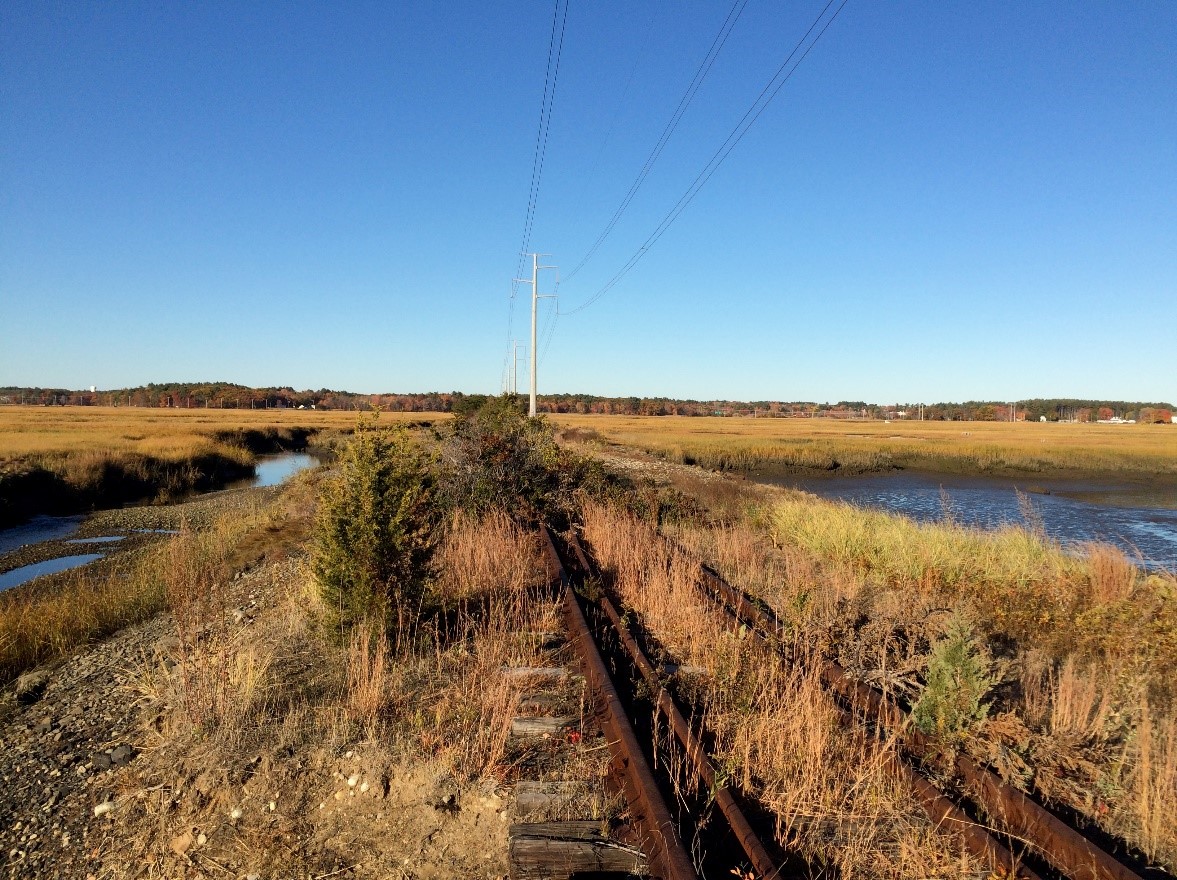 The planned New Hampshire Seacoast Greenway (NHSG) extending 14.5 miles from Seabrook to Portsmouth will be a unique trail in New Hampshire.  The trail will serve as a critical link in the East Coast Greenway (ECG), a 3,000-mile-long “urban Appalachian Trail” running from the Canadian border to Key West and connecting major cities, small towns and natural areas along the eastern seaboard.

Planning for the NHSG began in 2008 led by the Rockingham Planning Commission and involved corridor communities, bike and trail advocacy organizations, three state agencies, interested individuals, and the National Park Service. The advisory committee started by developing a conceptual design and implementation plan, researched economic benefits, worked with the State to secure the corridor, conducted outreach to build support in corridor towns, and worked with communities and NHDOT to execute trail management agreements.  In 2019 the state acquired the remaining 9.6 miles of the corridor from Hampton to Portsmouth and initiated a preliminary design. Completion of the Hampton-Portsmouth segment is anticipated for early 2022.

The ECG in Massachusetts will reach the NH border in 2020. Developers of projects along US Route 1 in Seabrook have committed to donations of materials, labor and funding to construct a trail in Seabrook once a trail agreement with NHDOT can be completed.  The jewel in the NHSG’s crown, but also its biggest challenge, will be Hampton Marsh. In 2016, The University of New Hampshire Engineering Department developed a concept design for adapting the old railroad causeway through the Marsh. This would open several sections and span them with boardwalk to improve tidal flow and marsh health, while elevating the remaining causeway sections for resiliency. Building this segment to complete the NHSG will require a combination of federal and private sector funding together with the dedication of the many community champions who have brought the Greenway this far.

The above serve as examples of successful collaboration to plan for and improve trails.  Identifying champions is always an important piece of the puzzle.  Consider the local trails committee, snowmobile club, trail-focused volunteer group, statewide group like the NH Rail Trail Coalition, or regional planning commission as a partner.  In addition, NHDOT is an important partner as well.  In undertaking rail trail planning efforts, think creatively, think collaboratively, and – Happy Trails!

Scott Bogle is a Senior Transportation Planner at Rockingham Planning Commission and can be reached at sbogle@ therpc.org or 603-658-0515.

Craig Tufts is a Principal GIS/Transportation Planner at Central New Hampshire Regional Planning Commission and can be reached at ctufts@cnhrpc.org or 603-226-6020.

Henry Underwood is a GIS Specialist and Planner at Southwest Region Planning Commission and can be reached at hunderwood@swrpc.org or 603-357-0557.