On Thursday, almost completely along party lines, the Senate passed HB 1 and HB 2, the biennial state budget and trailer bill for fiscal years 2022 and 2023. The budget bills now head back to the House, where we expect a request for a committee of conference. That committee will have a deadline of June 17 to reach a budget agreement for each chamber to address on June 24.

Overall, the Senate budget for fiscal years 2022-2023 provides a $10.4 million increase in total aid to municipalities over the current biennium budget, which is depicted on the chart below.  Here is a summary of the municipal highlights in the Senate budget: 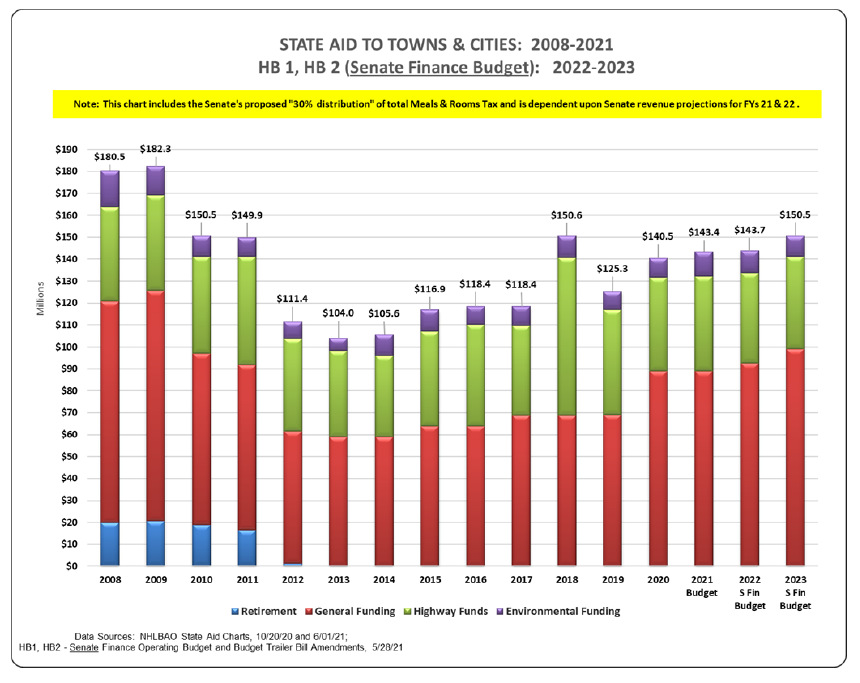 One regrettable aspect of the Senate’s budget trailer bill is that it contains a variation on the so-called “divisive concepts” legislation that has occupied so much of the legislature’s energy this year. This provision of HB 2 amends the state human rights statute to prohibit a public employer from instructing any employee or other individual that, among other things:

Setting aside the merits of any “diversity training” program, and regardless of what anyone thinks about “critical race theory” or any other theory, it is troubling that the legislature is seeking to dictate what employers may and may not say to their employees. This legislation, opposed by hundreds of businesses and nonprofit organizations, is another example of using state legislation to advance a national political agenda.

If the legislature is going to prohibit this kind of speech, what is next? Can we now expect that every new legislature will establish new rules about what local officials are allowed to say to their employees? Earlier this year the House wisely defeated a bill (HB 111) that would have subjected municipalities to expensive lawsuits for actions taken in good faith by their officials and employees; HB 2, however, would subject municipalities to lawsuits merely for providing training in something that an employee construes as a “divisive concept.” This language needs to be removed from HB 2.

In the first day of a two-day session, the House voted on several bills with municipal impacts yesterday.

Remote meetings. The House approved an amended version of SB 95, which originally authorized public bodies to continue holding remote meetings as they have done during the state of emergency. The amendment, however, eliminates that authority and merely creates a legislative committee to study the matter.

The bill will now go back to the Senate with a request to concur. Most likely the Senate will instead request a committee of conference. That committee could restore the language allowing remote meetings or, perhaps, come up with some kind of compromise. Meanwhile, the Senate has added that same language to HB 108, which itself is almost certainly headed for a committee of conference. Thus, while the outlook for continued remote meetings is not rosy, there is still hope.

Pre-processing, duplicate elections. The House passed SB 89, which originally authorized the pre-processing of absentee ballots at state and municipal elections—but it amended the bill to remove that section.

The House amendment also includes the provision, discussed in Legislative Bulletin #21, that threatens to require two separate elections every other November, one for federal races and one for state races. The amendment states that if Congress enacts the “For the People Act,”  elections for state and county offices (as opposed to federal offices) in New Hampshire would nevertheless follow “all procedures and requirements relating to elections conducted pursuant to the New Hampshire constitution and as prescribed by New Hampshire law . . . , including but not limited to those procedures and requirements relating to voter eligibility, voter registration, absentee voting conducting the vote, and counting of votes.”

As we stated previously, this would create an impossible situation; but the federal legislation creates its own impossible situation, requiring, among other things, that every polling place be open at least 10 hours a day for at least 15 consecutive days leading up to election day. SB 89 is almost certainly headed to a committee of conference; but the best solution is to render the amendment moot by ensuring either that the “For the People Act” does not become law or that the provisions that would make elections impossible in New Hampshire are removed.  We plan to work on that with our federal delegation.

Outdoor dining, summer camps & vaccinations. As we wrote in the Bulletin last week, SB 155, an omnibus bill involving a variety of matters related to COVID-19, came out of the House Executive Departments and Administration Committee with two competing amendments (1646h and 1685h) and no committee recommendation; neither amendment could garner a majority vote. Yesterday the House rejected amendment 1685h, which included a section that would have prohibited local government, the state, or a private employer from mandating any type of vaccination or even asking employees about their vaccination status. Instead, the House passed SB 155 with amendment 1646h, which codifies various emergencies orders, such as expansion of outdoor dining and protection of preexisting nonconforming summer camps, and does not include any restrictions or regulations relative to vaccinations. SB 155 will likely go to a committee of conference.

Yesterday was the deadline for the House and Senate to act on all bills. Any bill that passed both chambers and was not amended in the second chamber is now on its way to the governor after a short trip through the enrolled bill process. (A few dozen have already made their way to the governor and have been signed into law. You can find the list under “2021 Chaptered Final Version”—the link is in the “Resources” area near the bottom of the general court’s home page.)

Any bill that was amended in the second chamber goes back to the first chamber, which will decide to either concur with the amendment and send the bill to the governor, request a committee of conference, or “non-concur” and let the bill die. The last of these options is not often exercised.

All committees of conference must be created by next Thursday, June 10, and must issue their reports by Thursday, June 17. Information about each committee of conference, including the names of members and time and place of the first meeting, will appear on the bill’s docket and at the Committee of Conference link, also in the “Resources” area on the home page. Committees frequently meet and then recess until a time later the same day or the following day, and the time and place of the recessed meeting do not necessarily get posted on the website; thus, it often is necessary to be at the initial meeting to know when and where the recessed meeting will occur.

Of course, things are going to be a little different this year, as the state house and the legislative office building are still not open to the public. Although we have not seen anything official, we assume public access to committee of conference meetings will be provided via Zoom and YouTube. Whether committee members themselves will participate in person or virtually, we do not know yet.

If a committee of conference on a given bill reaches agreement, the agreed-upon version of that bill then goes to both the House and the Senate for an up-or-down vote—no further amendments are permitted. If both chambers approve the committee of conference report, the bill passes and goes to the governor. If either chamber rejects it, the bill dies.

As the legislative session winds down, here are a few housekeeping items.

Retained and re-referred bills. The House and Senate will hold their last meetings of the regular 2021 session on June 24, but that is not the end of legislative activity for 2021. There are 190 retained bills (an unusually high number) in the House and 42 re-referred bills in the Senate, all of which must receive a committee recommendation by late this calendar year (November 18 for retained bills; the deadline for re-referred bills has not been published yet). While it is possible that a few committees will meet in the next few weeks to discuss these bills, most will not do so until September or later. (There usually is minimal or no legislative activity in July and August.) As we do not publish the Legislative Bulletin in the summer and fall, please check the House and Senate calendars regularly for committee activity on any retained or re-referred bills of interest.

Every retained or re-referred bill will ultimately get a committee recommendation of Ought to Pass (or Ought to Pass with Amendment), Inexpedient to Legislate, or Refer for Interim Study. Those recommendations will go to the full House or Senate, as the case may be, at their first session in January, and each bill will proceed from there in the same manner as other bills.

Tabled bills. Each week’s House calendar and Senate calendar includes a list of bills that have been laid on the table in that chamber.  Bills that were still on the table after yesterday’s Senate session and today’s House session will die there. It is theoretically possible for a bill to be removed from the table now and passed, but because the deadlines for action on all bills have passed, this would require each body to suspend its rules; this is extremely unlikely.

As has been made clear this year, a bill’s death on the table doesn’t necessarily prevent it from living on in spirit. In more than one case, the language of a tabled bill has been added to another bill, such as HB 2, the budget “trailer bill.”

A tabled bill also could come back next year with a different bill number. This may surprise some who are familiar with the rule that if a bill is killed in the legislature’s first year, a substantially similar bill cannot be introduced in the second year. That rule, however, applies only to bills that were voted inexpedient to legislate or indefinitely postponed. If a bill dies in any other manner—on the table, or because of non-concurrence on an amendment or a committee of conference’s failure to reach agreement, or a veto by the governor—a substantially similar bill may be introduced the next year.

The 2022 session. It may seem too early to begin thinking about legislation for next year. It’s not. In fact, if you wait a few months, it will be too late.

There will be just one period this year for filing legislative service requests (unlike election years, when there is one period after the state primary and one period after the general election). The House has set a very short filing period—just five business days, September 13 through September 17. We have not yet seen the Senate’s schedule—it usually has later deadlines.

Local officials who are thinking about proposing legislation for next year should talk to their representatives and/or senator soon. And please let us know about anything you are proposing, so we can work together as appropriate, or at least not work at cross purposes.

There are no committee hearings scheduled next week.

There are no committee hearings scheduled next week.

SB 15, relative to ratification of amendments to the state building code.  Passed with Amendment.

SB 46, relative to the use of electronic poll books by cities and towns.  Passed.  NHMA Policy.

SB 48, relative to the formula used to determine current use tax rates.  Passed.

SB 96-FN-A, (New Title) relative to implicit bias training for judges; establishing a body-worn and in-car camera fund and making an appropriation therefor; amending juvenile delinquency proceedings and transfers to superior court; and establishing committees to study the role and scope of authority of school resource officers and the collection of race and ethnicity data on state identification cards.  Passed with Amendment.

SB 154, prohibiting the state from enforcing a Presidential Executive Order that restricts or regulates the right of the people to keep and bear arms.  Passed with Amendment.

SB 155-FN, codifying provisions included in select emergency orders issued by the governor in response to the COVID-19 pandemic.  Passed with Amendment.

HB 1-A, making appropriations for the expenses of certain departments of the state for fiscal years ending June 30, 2022 and June 30, 2023.   Passed with Amendment.

HB 25-A, making appropriations for capital improvements.  Passed with Amendment.