Is your Select Board or Planning Board hearing more from residents about desire for safe pedestrian accommodation than in years past? The COVID-19 pandemic has led more people in New Hampshire and around the country to seek their exercise outdoors, in some cases leading to a realization that they don’t feel as comfortable walking on local roadways as they’d like. Regional Planning Commissions can often help municipalities assess their non-motorized access and safety needs, whether for sidewalks, simple shoulder widening, or separated paths where right of way doesn’t exist for on-road improvements. The following paragraphs offer snapshots of several local and regional pedestrian planning initiatives, resources for facility design and considerations around funding and maintenance. Examples range from large cities to small towns to multi-town regional efforts.

A Network Planning Approach for Nashua

In the fall of 2019, the City of Nashua engaged the Nashua Regional Planning Commission (NRPC) to characterize areas with the greatest potential for expansion of its pedestrian transportation network with an emphasis on routes to high demand destinations, especially in areas of high transit dependency.  The goal of the project was to gain a greater understanding of current conditions and areas where improvements are needed most so that City resources can be allocated equitably and efficiently. The project involved extensive data compilation and outreach activities including a public outreach survey, two public participation sessions, a GIS-driven hotspot mapping exercise, and targeted field work.

To help assess current conditions and guide future planning efforts, the project team compiled an inventory of the bicycle and pedestrian infrastructure in Nashua, including sidewalks, bike lanes and trails, together with bike/ped-involved crash data over a four-year period.  NRPC then completed a high-level GIS “scan” and data review of existing conditions to help identify areas with both a high potential demand for pedestrian travel and a need for infrastructure improvements.  To determine demand and need, Census blocks were scored according to characteristics that quantify the relative quality of the walking experience together with factors that are likely to generate pedestrian activity. These included the presence or lack of sidewalks, proximity to key destinations such as parks and schools, public transit usage, and demographics factors such as households lacking access to a personal automobile. The sum of these inputs formed the basis of a cumulative level of service (LOS) index score for each census block illustrated on a Hot Spot Map that visually depicts areas of highest need and demand. 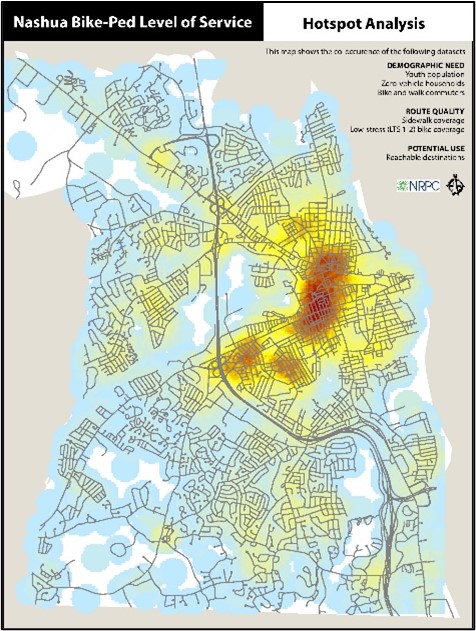 The next phase of the project involved an assessment of the sidewalk network in the high demand/high need areas previously identified which, not surprisingly, were concentrated around Nashua’s urban core. For this analysis, NRPC used the Statewide Asset Data Exchange (SADES) framework and ArcGIS mobile technology to collect field data on sidewalks, crosswalks, curb ramps, and pedestrian signals, all of which were compiled into a geodatabase that includes the presence or absence of relevant features, their relative condition, and associated physical barriers.  Between spring and fall 2020 NRPC surveyed approximately 17 linear miles of pedestrian assets around downtown Nashua and adjacent neighborhoods.

Of the 17 miles of sidewalk assessed, approximately 57% were rated as being in good condition, 35% were rated fair, and 8% were deemed poor. The curb ramp assessment revealed that approximately 68% of the 350 curb ramps assessed were in good condition, another 25% were Fair, and 7% were in Poor condition.  Of the crosswalks assessed, 70% had markings in good condition and 80% featured adequate ambient lighting and a minority of crossings had additional pedestrian amenities.  Approximately one-third were equipped with pedestrian-actuated buttons, 15% had pedestrian-specific signage, and there were five crosswalks with raised humps. These findings were then complied and mapped to allow the city to prioritize improvements based on areas with the highest need and potential demand. Though much of the sidewalk network in Nashua’s core area is in good condition, several gaps in the network and areas where improvements are needed were identified.

Finally, the project suggested a series of strategies for implementing improvements to the City’s pedestrian network. The overall analysis was also informed by the extensive public engagement undertaken as a central part of the project. The result of this analysis provides a foundation for the community to develop a comprehensive plan for improving its pedestrian transportation network in an efficient and equitable way that maximizes public benefit and return on public investment.

Sidewalks, Streetscapes and Economic Vitality in the Lakes Region

Taking a regional approach in a more rural part of the state, the Lakes Region Planning Commission (LRPC) is working with a handful of its member towns (list them?) to provide information and training on implementing streetscaping concepts designed to improve pedestrian safety while also enhancing downtown economic vitality. The work has been funded through a USDA Rural Housing Service grant.

As part of this work LRPC is undertaking sidewalk inventories in several of the communities. These data collection efforts follow NH Department of Transportation (NHDOT) protocols to assess the condition of existing sidewalk infrastructure, including crosswalks and curbs. The project has also engaged municipal planners, volunteers, and local businesspeople in roundtable discussions on Complete Streets concepts, streetscaping improvements, funding sources available and the planning process needed to access those funds.

A lot of community outreach and planning is required before streetscaping projects can move into the queue for federal, state, and private funding sources. Locally adopted pedestrian and bicycle plans can harness a community’s vision and goals for providing safe access for all users of the transportation network.  A review of local transportation plans with an eye toward integrating land use regulations and transportation planning is part of the process.

Community planners can engage the public in some creative brainstorming to determine how effective a potential streetscaping infrastructure project may be. These demonstration projects, using readily available “pop-up” tool kits, can be used to involve the public in planning infrastructure projects. These can be fun community events that allow town officials to gauge public support for project proposals.

Temporary crosswalks, curb extensions, or bicycle lanes can be established to show how such traffic calming devices can work to improve traffic flow and pedestrian safety. Other streetscaping infrastructure can be designed to enhance public gathering places with benches, greenery, and lighting using resources such as AARP’s Pop-Up Placemaking Tool Kit. Providing music, food, and games are ways to attract public participation in these temporary project design events, which build energy, enthusiasm, and hopefully financial support for downtown improvements.

A healthy tourism economy is important to many Lakes Region communities. Sidewalks, pathways, and other transportation infrastructure that connect destination points can bring people downtown, spur economic vitality and enhance the attractiveness of a small town’s commercial district.

Resources and Strategies for Smaller Communities

For small communities a good resource for planning safer pedestrian access, with or without their regional planning commission, is the Federal Highway Administration Small Town and Rural Multimodal Networks Guide, referred to as the ‘STAR Guide’. It summarizes physically separated facilities like sidewalks, side paths, separated bike lanes and shared use paths; as well as shared facilities like shoulder bike routes, pedestrian lanes and advisory shoulders. The guide discusses the importance of a network approach, as well as common challenges in small towns such as accessibility requirements, design solutions that don’t require specialized sidewalk plows, and balancing safety and throughput when state highways serve as main streets.

A network approach is important in pedestrian planning to ensure that ultimately facilities connect people where they want to go, making walking a safer and more attractive option for short utilitarian trips (to school, to the library) as well as for exercise. How many neighborhoods within a half mile of your town’s elementary school are connected to school by safe pedestrian accommodation? What other destinations in town would residents like to be able to reach on foot? In addition to travel along a road, are road crossings safe and pedestrian friendly? Are crosswalks marked only with paint or with advance warning signs and/or with pedestrian-activated beacons? Are crosswalk markings maintained annually so they remain highly visible to oncoming drivers?

A range of solutions are available to improve safety and accessibility for people walking. Each has its own advantages and disadvantages.

Sidewalks – Sidewalks are the standard pedestrian accommodation. They provide physical separation from traffic on the adjacent roadway through a curb or an unpaved buffer space. They are recommended for all but the most low-speed and low volume roadways. Considerations though include their cost to construct and maintain, potential drainage impacts and expense if curbing is used, and right of way availability.

Multi-Use Shoulders – While lacking the safety benefits of separation by vertical curb or horizontal buffer, on low volume/low speed roads with tight right of way constraints a widened shoulder may work to accommodate people both walking and bicycling. A key consideration is whether there is enough room for both a sidewalk and shoulder bicycle route. A narrow shoulder on a busy road creates a high stress environment for bicycling or walking, but a narrow shoulder next to a vertical curb is even more dangerous as it leaves someone riding a bicycle little or no room to maneuver if forced over by a passing car. 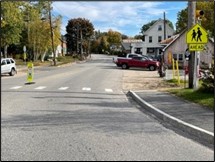 Separated Paths - Sometimes pedestrian access can be provided outside of the road right of way. Multi-use paths (including rail trails) can provide important pedestrian connectivity, especially when they parallel a roadway such as the Salem Bike/Ped Corridor paralleling Route 28 in Salem. A multi-use path is typically 8’-10’ wide and designed to carry both pedestrian and bicycle traffic. Much narrower paths can be suitable for people walking. When Stratham developed their Safe Routes to School Plan in 2018 it was clear that many of the roads connecting residential areas to schools had very constrained rights of way making sidewalks impractical without expensive land acquisition. What the town did have was a good deal of open space and an active trail-building program through their recreation department. With an easement from a landowner whose land abutted a key stretch of roadway in the school zone an off-road path was built at low cost to allow a safe walking route for kids off the road. Other path connections were identified to allow connections between cul de sac neighborhoods without using roadways.

A well-planned network of sidewalks and other pedestrian accommodations enhances the safety and livability of your community. The role of streetscape improvements in supporting economic revitalization in downtowns is well documented. Safer places to walk support recreation and healthy physical activity, and also create opportunities for walking to replace driving for more short trips – whether to school, the library or the grocery store. Check out the STAR Guide as a starting place, and contact your regional planning commission for more resources and technical assistance.