Infrastructures in the United States provide critical services to the general population, from drinking water and wastewater treatment to transportation, electricity, and municipal buildings such as schools, public works, safety complexes, and town offices. These systems are composed of myriad elements, generally termed assets, which are owned, operated, and maintained by federal, state, and local municipal governments. Assets owned, operated, and maintained by New Hampshire municipalities tend to be of a smaller scale than those of federal and state control, and frequently include numerous components and subcomponents. For example, a wastewater treatment facility may be considered an asset, while elements of the facility such as headworks, settling basins, and chlorination basins are considered components. These municipal assets offer intrinsic value to communities, which rely on infrastructure for essential function.

In many municipalities, the capital necessary for proper operation and maintenance of critical infrastructure is simply not available. Competition for funds is strong, often forcing communities to rely on reactive measures to repair and replace municipal assets following failures. Some communities have adopted asset management programs which have allowed optimization of funding priorities. This program is a framework by which municipalities manage their physical assets similarly to financial assets, with objective metrics established to assess their value, performance, and condition. Improved understanding of assets, their operation and maintenance requirements, and their useful life cycles leads to a more efficient approach for allocation of resources while maintaining a high level of service.

Assets are vulnerable to a litany of stressors, including social, economic, and environmental factors. A key element of asset management is assessment of probability and consequence of failure for each system component. These are quantitative metrics based on qualitative observations which measure both the likelihood of an asset’s failure and the expected fallout associated with such a failure. They are largely influenced by asset age, condition, and location. Probability and consequence of failure are used to determine risk for municipal assets. Risk is typically treated as the product of the two metrics. Municipalities can identify assets in need of service by ranking them in terms of their risk metric. Assets with the greatest risk pose the worst potential failure impacts while also being most likely to fail. Alternatively, some communities develop criticality matrices, which plot assets based on their probabilities and consequences of failure. An example of a criticality matrix is shown below in Figure 1. Prioritization of assets can be based on overall risk of failure, Probability of Failure (PoF), Consequences of Failure (CoF), or a weighted combination of these metrics – this decision is a community’s prerogative based on what factors it considers most crucial. 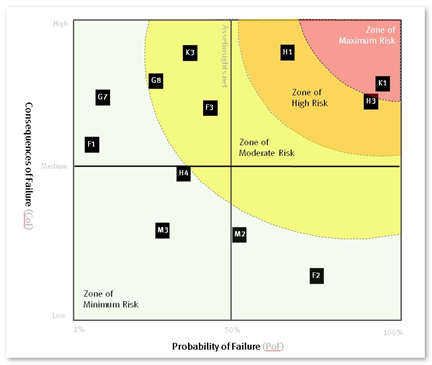 The best way to manage these risks is to implement appropriate maintenance, repair, and replacement (MR&R) measures. Communities can adopt risk management criteria for this decision. This generally includes MR&R recommendations based on asset criticality. Approaches vary with asset type and municipality, but risk management strategies are contingent on what a community deems to be an acceptable level of risk for an asset.

While municipal asset management has been adopted by many communities in New Hampshire, climate change presents a wrinkle for new program implementation. Climate change is manifested in rising air and sea temperatures, an increase in both frequency and intensity of storm events, and sea level rise, among countless other impacts. These changes will affect New Hampshire communities and will influence asset management programs, mandating dedicated planning.

The most obvious climate-related impact on New Hampshire infrastructure is the increased frequency and intensity of storm events. There has been a 15-38% increase in magnitude of daily extreme precipitation events in coastal New Hampshire since the 1950s, and the increased frequency of extreme precipitation events in coming years is anticipated to expand the risk and magnitude of flood events. The increase in frequency and intensity of these storms will put additional stress on almost all infrastructure moving forward. Stormwater and wastewater infrastructure could become overwhelmed by increased flows, transportation infrastructure and municipal buildings could face flooding, and power lines could be damaged by magnified storm conditions. Future development will add to the amount of impervious cover present in populated areas, resulting in more runoff, less infiltration into soil, and further possibility of overwhelmed stormwater management controls. As a result of these increased stresses on infrastructure, risk of asset failure will only increase. 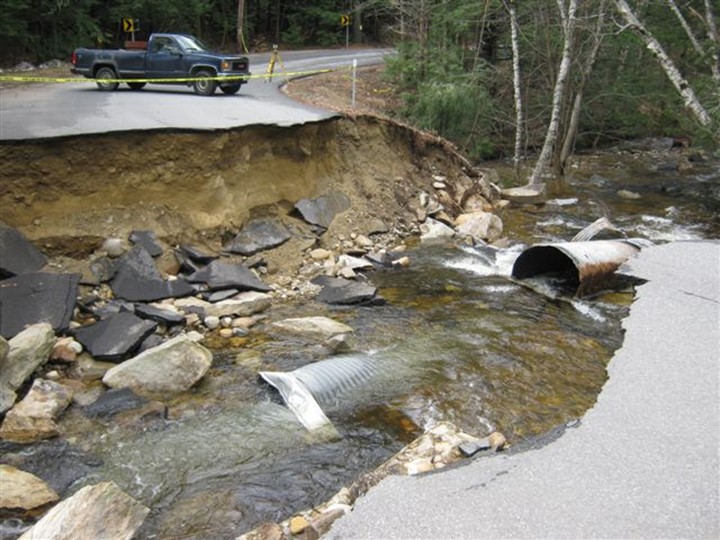 Sea level rise, or SLR, is one of the most prevalent impacts of climate change. SLR is occurring globally as a result of both melting ice and thermal expansion of oceans. As sea level rises, coastal communities are at high risk, and when coupled with worsening storm conditions the risk of severe flooding and major property damage will only increase. Data suggests that relative sea level (RSL) rose by 7.5-8.0 inches in coastal New Hampshire and Southern Maine between 1912 and 2018, and future relative sea level rise (RSLR) projections suggest further increase of 0.5-2.9 feet by 2050. Impacts associated with SLR in coastal communities include tidal and groundwater inundation as well as more extreme tidal surges. While prospects of significant SLR pose dangers to seacoast infrastructure, it will not be the only region to feel the effects. Inland communities will also face new challenges in the future.

SLR could cause rising groundwater levels extending up to 3 miles inland. Changes in groundwater levels and increased salinity would negatively affect vegetation in both freshwater and saltwater wetlands and could cause inland migration of tidal ecosystems. Additionally, inland migration of the groundwater interface between freshwater and saltwater could pose a threat to drinking water supplies and impact drinking water infrastructure. SLR could also lead to inland migration of people escaping volatile seacoast conditions in coming decades. While this may be gradual, it is inevitable as coastal areas become more difficult to inhabit. As the inland populations swell there will be additional stress placed on infrastructure, likely requiring expansion-related improvements on top of the needed age-related improvements.

There are significant costs to society associated with these climate-related impacts extending beyond economics and the environment. On a personal level, these impacts are manifested in the form of service interruptions, costs for repair, replacement, and emergency response, closed roads, power outages, and flooded homes, among many others. Society will be increasingly affected by climate change in the future and will be forced to face its consequences head-on. 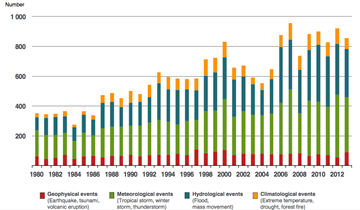 Figure 3: Increases in natural disasters and extreme weather events in North America from 1980 to 2012

Climate impacts on humans are not isolated to storm events and SLR. Droughts are becoming more intense every year, leading to exhausted water supplies and usage restrictions. Natural disasters are becoming more common, such as hurricanes, of which the second-highest annual total were named in 2020; and wildfires, which have doubled in frequency between 1984 and 2015 in the western US. Climate change is leading to general unpredictability in natural phenomena, which impacts humans as it impacts the environment, and the time has come for municipal capital planning to reflect these risks.

Given potential risks to municipal infrastructure from climate change impacts, communities need to plan for the long-term. This requires an evolution in our way of thinking when it comes to capital planning. As discussed previously, municipalities have historically utilized an approach which focuses on maintenance, repair, and rehabilitation of assets in anticipation of or in reaction to failures. While this strategy works to keep infrastructure serviceable, it is neither the best option for cost-effectiveness nor for system performance. Instead, municipalities should pursue a more preventive, or, optimally, more predictive approach.

By utilizing asset management methods, communities can make better-informed capital planning decisions. A key element of this approach is comprehensive understanding of all assets and their vulnerabilities. Implementing preventive and, ideally, predictive maintenance measures for assets based on their age, condition, and general risk reduces asset failures. This requires projecting the end of an asset’s lifespan, which is prolonged by maintenance. Minimizing failures allows communities to maximize their funding, since it is always cheaper to maintain an asset than it is to repair, rehabilitate, or replace that asset after a critical failure. This reduces the total life cycle cost of assets, which represents their lifelong financial impact, including capital cost, operations costs, maintenance costs, and repair and rehabilitation costs. Improved asset understanding provides municipalities a better grasp of anticipated spending necessary to maintain level of service for infrastructure while minimizing failure scenarios. If communities can better predict spending expectations and requirements, they can plan a timeline for implementing MR&R measures to distribute capital expenditures, preventing a scenario in which failures mandate overspending budgets. This allows municipalities to optimize funding and infrastructure level of service.

While asset management does lead to improved capital planning approaches, evolution of asset vulnerabilities is not always considered in active programs. Climate change already influences risk for infrastructures, and this will only increase. As a result, it is important that municipalities examine long-term vulnerability of assets. While certain infrastructure may not currently be particularly vulnerable to, for example, sea level rise, it can and likely will see elevated risk in the future. It is very important that municipalities understand this is a dynamic situation and assess future vulnerabilities long-term to ensure that the capital planning process is fully informed.

There is room for improvement when it comes to understanding and optimizing municipal infrastructure for both level of service and expenditure effectiveness. Adopting an asset management approach with a focus on total life cycle costs and infrastructure vulnerability, particularly with regard to impacts of climate change, would allow communities to maximize both their infrastructure performance and funding efficiency.

Joseph Ducharme, Jr, PE, BCEE,  is VP, Regional Manager for Northeast Municipal Engineering Services Group for Hoyle Tanner.  Joe can be reached via email at jducharme@hoyletanner.com, or by direct phone (603) 460-5160; and Aidan Short, Civil Engineer, is an Environmental Engineer with Hoyle Tanner. Aidan can be reached at ashort@hoyletanner.com, or by direct phone (603) 413-2858.

Article Topics:
asset management
climate change
New Hampshire Town and City Magazine - March/April 2021
The 2021 Legislative Session
Municipal Asset Vulnerability and Climate Resiliency Considerations when Developing Your CIP
What Exactly Do Hydrogeologists Do for Municipalities?
Energy Improvements to Existing Buildings
LEGAL Q&A: Municipal Official vs Municipal Employee: What is the Difference & Does it Matter for Compensation & Personnel Policies?
NHARPC CORNER: Regional Planning and Coordination are Critical to Addressing New Hampshire’s Housing Crisis
HR REPORT: Preparing for the End…Work in the Post-Pandemic World
TECH INSIGHTS: Why Strong Passwords Aren’t Enough – 3 Tips for a Better Password Policy
NLC REPORT: Exploring State Interference Before, During, and After the Crisis