LEGAL Q&A: Revaluation: What is it? And how does it work?

This month’s Legal Q&A is going to be a bit different. Not only is it a collaborative effort with our new Government Finance Advisor, Katherine Heck, but it’s also designed to serve as a handout for you when your citizens ask about the revaluation process. It’s a subject that citizens are often confused about simply because it’s not something that they think about except once every five-years or so. Hopefully, this month’s Legal Q&A helps you help them understand the process a little better.

Q: What is a “revaluation” or simply “valuation”?

A:  A revaluation is a periodic process whereby the municipality attempts to align what it estimates the value of each individual property within the municipality with that property’s true market value. In other words, it’s a municipal-wide appraisal.

Note, however, that there are special rules for certain properties. What rules apply in any particular instance is determined by RSA 75:1. And, of course, options such as placing a large piece of property without buildings into “current use” can also affect the valuation.

A:  State law requires that your property be assessed at market value. Market value is defined as the amount a typical, well-informed purchaser would be willing to pay for a property. RSA 75:1 further defines market value as: "... the property's full and true value as the same would be appraised in payment of a just debt due from a solvent debtor."

Assessments are arrived at, as of April 1st in a given year. However, the real estate market is constantly fluctuating making comparisons of assessments and sales a moving target, which is why statute requires adjusting the assessed values as of April 1 each year following a 5-year full reevaluation. (RSA 75:8)

Q:  How often does a revaluation happen?

A:  By law (RSA 75:8-a), a municipality must perform a valuation every 5-years for all properties in the municipality’s boundaries. When, exactly, that occurs for your municipality depends on when it’s first valuation was reviewed by the Department of Revenue Administration (DRA).

Q:  How does a revaluation affect property taxes?

A:  A common misconception among property owners is that after a revaluation is that their increased tax assessment value will automatically result in increased property taxes.  This is simply not true. Property taxes are determined proportionally. As long as the entire community saw values rise by the same proportion, then each property still has the same proportion of value relative to every other piece of property in the municipality.

Q:  How does a revaluation affect the tax rate?

A:  The common misconception among property owners about revaluation increasing their property taxes generally stems from their use of an outdated tax rate. Until recalculated as part of the next budget cycle, the prior tax rate may be wrong – perhaps very wrong.

Unfortunately, because new tax rates are not calculated at the time of revaluations, many citizens mistakenly use the old tax rate to calculate their property tax payments when a revaluation occurs. As such, they often overestimate the amount that they will pay drastically when, in fact, most municipalities will see a revaluation increase property values proportionally across the entire municipality. The only time a property owner would see a change in their actual contribution toward the budget is when their property value does not change proportionally alongside the rest of the municipality’s property values. 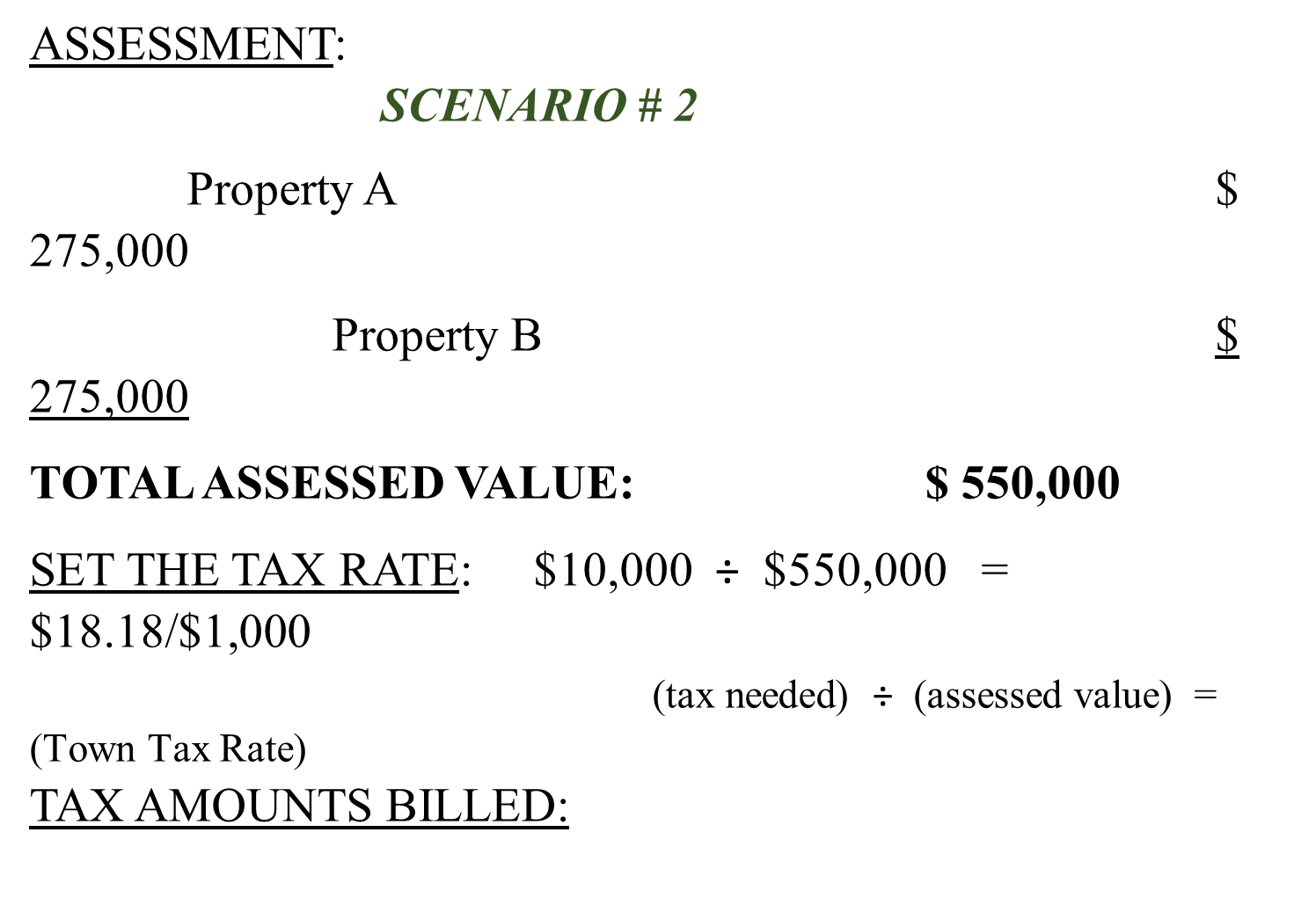 Q: When might a property value not change proportionally?

A:  The most common scenario where a property value might not change proportionally with the rest of the municipality’s property values occurs when someone makes substantial improvements to their property. For example, new buildings or extensions that dramatically increase the value of the property. Or a change in use, such as commercializing the property’s use, as with a short-term rental.

There’s also the converse that could occur as well. A property with a home could be abandoned or the home torn down. That would cause the value to decrease. Other potential factors could weigh in as well, such as site-specific environmental contamination.

Lastly, there’s also the possibility that some large new development – commercial or residential – occurs during the year, resulting in a substantial shift for everyone else’s taxes. But that possibility – like the substantial improvements or property damage scenarios – are not usually commonly “news” to the assessors during a revaluation year. They’re often things that the assessors learn about as permits are filed and projects completed, occurring either on or off the revaluation year, and anyone doing large projects to improve their property or seeing substantial property damage should expect to see a change in their property taxes in the year following the improvement.

Q:  Under what circumstances would a property potentially see a reduced tax amount?

A:  During the revaluation process, if a taxpayer’s assessed value increased by 10-percent and their respective municipality saw an overall increase of 15-percent, for example, that taxpayer would actually be responsible for a smaller share of the property taxes due, as their assessed value did not rise as fast as the overall assessed value in the municipality. As discussed above, this property did not change proportionally with the rest of the municipality’s property values.  As a result, this property has dropped proportionally compared to other properties and is therefore taxed at a smaller share, using the same tax rate.

Katherine Heck is Government Finance Advisor with the New Hampshire Municipal Association. She may be reached at 603.224.7447 or at kheck@nhmunicipal.org.

Natch Greyes is the Municipal Services Counsel (soon to be Government Affairs Counsel)  with the New Hampshire Municipal Association.  He may be contacted at 603.224.7447 or at legalinquiries@nhmunicipal.org.