More than 70% of buildings in the U.S. are over 20 years old. This is problematic since the majority of these buildings do not meet current insulation or air infiltration requirements. In an attempt to reduce operational costs, many building owners are choosing to renovate and upgrade the thermal efficiency of their buildings to reduce energy costs. To promote this effort, leading U.S. corporations, universities, and government agencies have committed to reduce energy use by 20% over the next 10 years through reduced carbon pledges (e.g. the 2030 challenge). 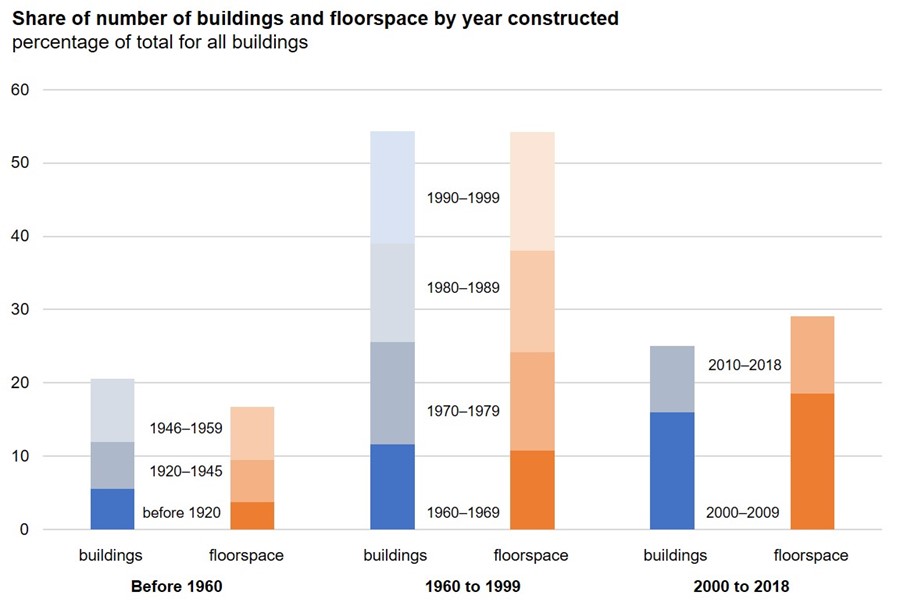 Figure 1- U.S. Energy Information Administration. Majority of buildings were built before 1999 and account for 54% of current building stock. Energy codes started being implemented after the year 2000.

When an air barrier or insulation is added to an existing exterior wall assembly, the assembly’s performance and how it interacts with moisture, air, and temperature will change. Understanding how modifications will affect the existing assembly and whether the existing assembly can manage the new building physics is critical. The condition of the existing building wall will dictate the level of modifications the building can handle and what repairs may need to be performed prior to initiating thermal improvements. For this reason, a building condition survey is critical to understanding the condition and performance of the existing assembly. Since no two walls are the same and since their current condition will vary based upon wall design, quality of original installation and materials used, weathering, and level of proactive maintenance; the proposed modifications may vary greatly. 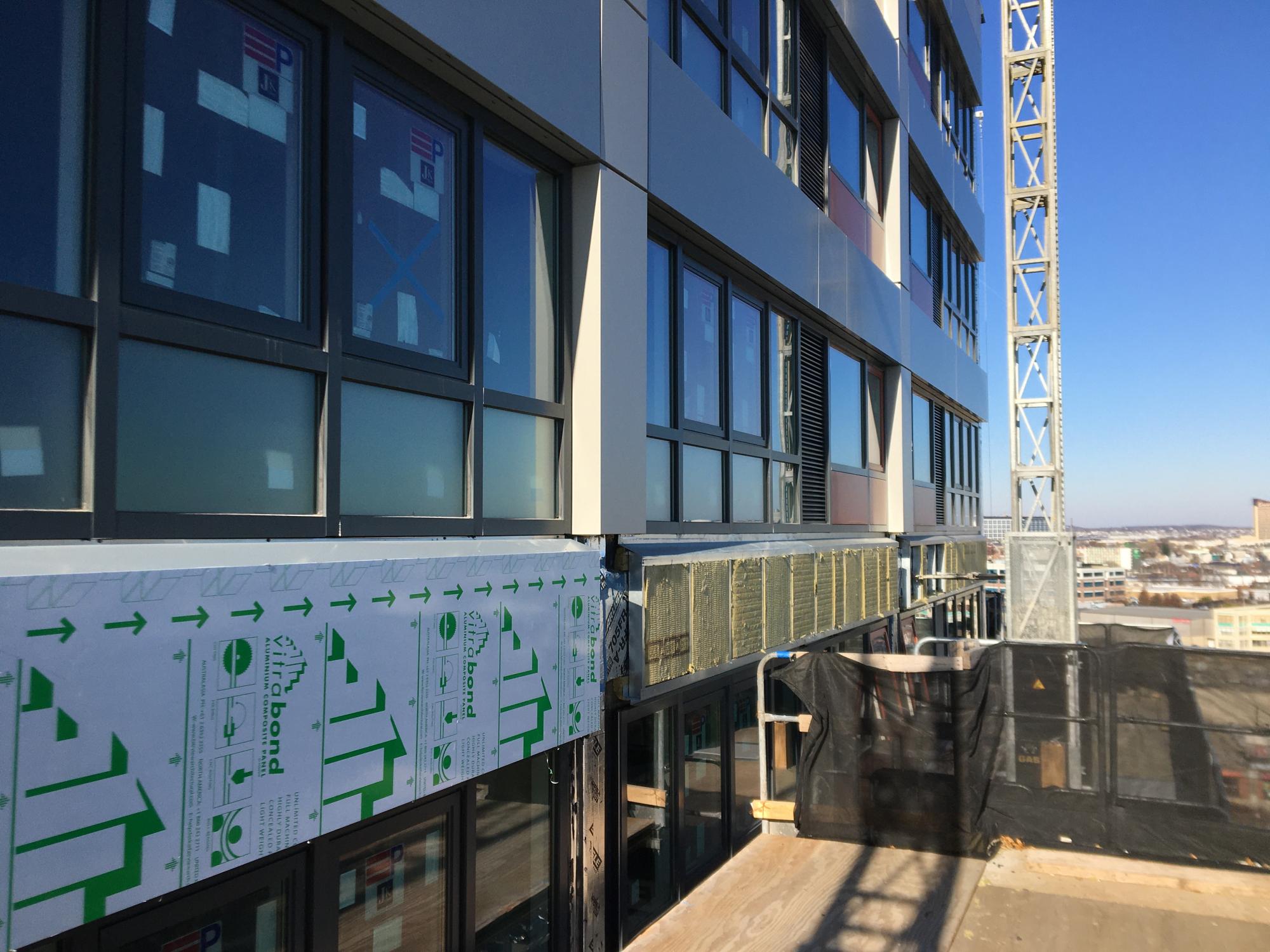 Typically, there are two methods of insulating existing walls: either on the exterior or the interior. The exterior renovation is often the preferred option as the insulation can be installed continuously without having to perform interior renovations or make accommodations for floor slab, structural frame members, or interior walls. Additionally, any imperfections in the existing wall may be able to remain in place and be protected from exterior weather.

When installing an exterior insulating system, the thermal and moisture barriers are shifted out to the exterior insulation layer, which is outboard of the drainage plane and structural members. Over the long term, this would provide the longest lasting assembly. While it may require periodic maintenance to maintain the new exterior cladding, the structure and the interior environment would be isolated from the exterior weather and could be expected to last longer than with an interior option.

This method also addresses thermal bridging issues that occur in older metal and wood stud walls that experience significant insulation R-value loss due to the lack of continuous insulation. For instance, metal studs will reduce the effective R-values to 55% of the stated value on the label4. For instance, an R-21 batt installed within a 6” stud has an effective R-value of R-7.4[i]. By increasing the exterior insulation, the thermal barrier shifts outward as does the potential dew point.

An exterior insulation project can match the performance expected in new construction. These assemblies generally consist of an exterior cladding, air cavity, continuous insulation, and air or vapor barrier. In the case of a stud frame wall assembly, the removal and replacement of the exterior sheathing allows the engineer to review the condition of the stud walls and for removal of the existing batt insulation. Any moisture-damaged insulation or deteriorated studs can be replaced. If the existing stud cavity insulation is not removed, a thermal analysis should be performed to confirm that the dew point will remain outboard of the air and vapor barrier. A vapor permeable barrier may be considered. 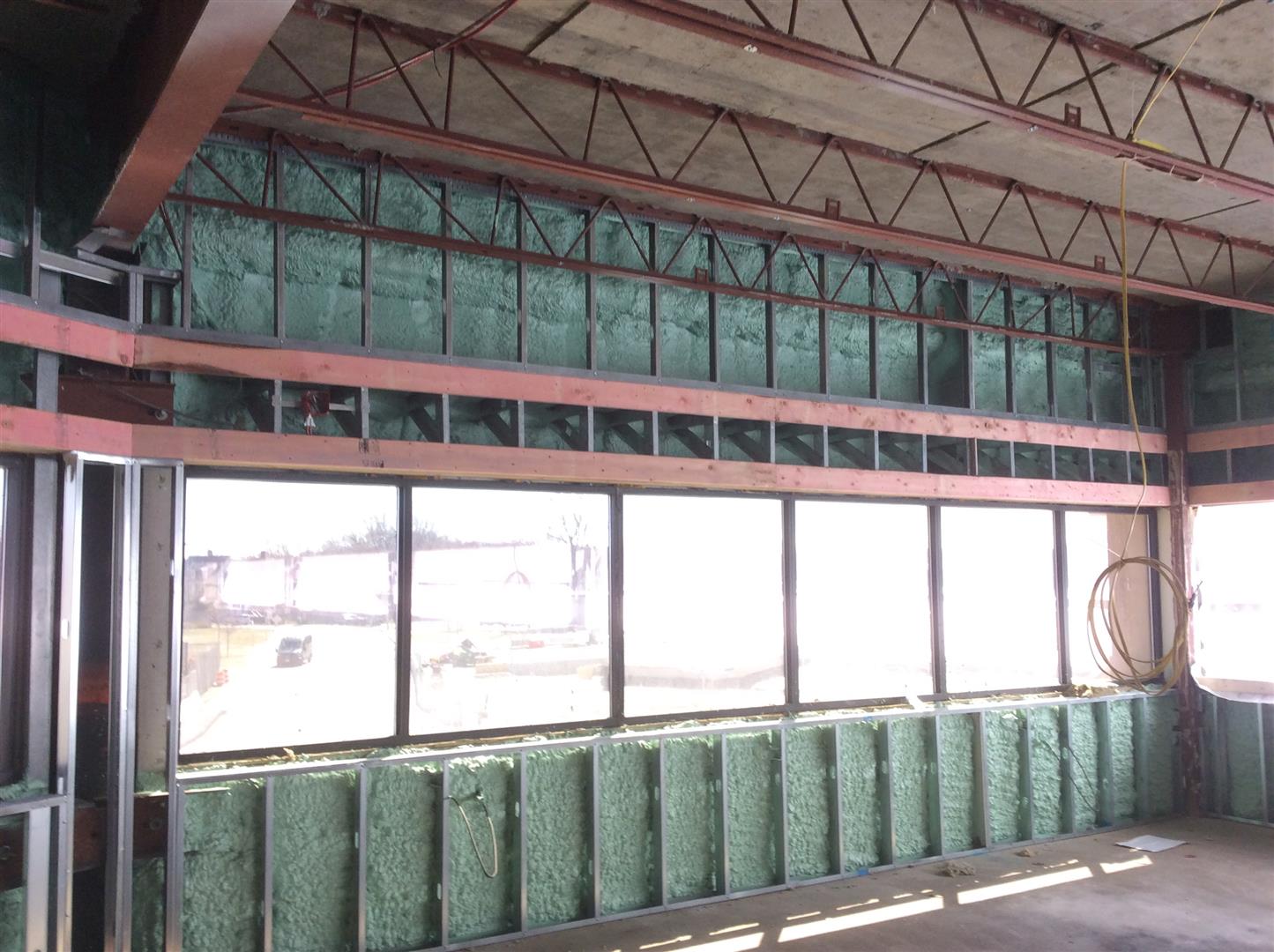 Exterior insulation is not always possible due to property line concerns, difficult access, the historic nature of the existing building facade, or aesthetic value of the building. When insulating the building from the interior, the condition of the exterior wall becomes more important as the new wall will experience more freeze/thaw cycles than it did previously, which can be a significant issue especially with masonry structures or other porous materials. Additionally, the building will still experience thermal bridging through the floor slab, interior walls, and other structural elements that are not removed and are not accessible.

For instance, in the northeast, many older solid masonry structures are being renovated to improve energy efficiency and comfort. These un-insulated load bearing masonry wall assemblies are being renovated by incorporating insulation inside the face of the exterior wall systems, replacing windows with insulated glazings and replacing the roof systems.

Research indicates that the use of fibrous insulation (e.g. fiberglass, rockwool, etc.) will be inadequate to eliminate water vapor transport through air exfiltration from the interior. The incorporation of a continuous vapor barrier on the warm side of the insulation is difficult to achieve and presents a problem with allowing the wall to dry to the interior. Although closed-cell SPF insulation can act as an air barrier, the thickness of SPF applied should be carefully considered to ensure the thickness provided is sufficient for it to allow some inward drying potential and not function as a complete vapor barrier. When working with existing masonry walls, an analysis should be performed to determine whether the existing wall systems function adequately with respect to dew point location and moisture accumulation over time. Unlike the cavity wall masonry veneer of the newer constructions of today, these multi-wythe, transitional-period exterior wall systems undergo consistent wetting and drying cycles. As there were no vapor barriers in the system, the wall is often able to seasonally adapt; to dry from the interior or exterior of the assembly (depending on which side is heated), while limiting the potential of condensation and frost inside the walls. While this type of wall system is not optimal in terms of energy efficiency, it performs hygrothermally well over time and has a good performance history when maintained. 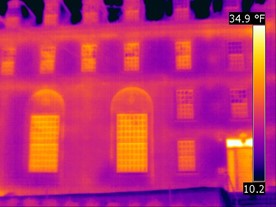 Although a thermographic analysis can indicate that a renovated solid masonry building can experience less heat loss than the uninsulated building; it is important to note that some areas, such as at building corners, changes in plane of building elevations (i.e. areas adjacent to stairwells), and around floor slabs can be difficult to thermally isolate from the interior. This can cause thermal bridging through the newly installed insulation. Another consideration is that the addition of insulation within a solid masonry assembly results in a shift in the temperature gradient and the natural wetting and drying cycles of the wall. Without the correct placement and correct physical characteristics of the air barrier, insulation, and vapor permeable layers; newly insulated walls can experience moisture accumulation that results in freeze/thaw cycling within the wall. This can lead to deterioration of the new interior wall components and original wall assembly.

It is important to note that a hygrothermal analysis must be performed on each individual wall system to determine the appropriate insulation thickness and determine what types of barriers should be considered. Evaluating the exterior surfaces to identify all defects (e.g. cracked or spalled masonry, open or cracked mortar joints, and failed sealant joints) is necessary so that repairs can be performed prior to performing interior energy upgrades.

Before insulating an existing wall, it is important that the wall is airtight. In an effort to identify performance issues of an existing wall assembly, there are multiple types of testing that can be considered. Several standards can be used to determine acceptable rates of air infiltration. Air infiltration standards for new construction are typically predetermined by the owner and designer, and reflect requirements designated by state or local building codes. These standards include associations such as the Air Barrier Association of America (ABAA), the U.S. Army Corps of Engineers (USACE) and the American Society of Heating, Refrigerating and Air Conditioning Engineers (ASHRAE). ASHRAE indicates that buildings with “average” air leakage have an approximate ACH50 rating of 3.9, “tight” rating of 1.3, and “leaky” rating of 7.0 or higher. These tests include, but are not limited to, blower door testing, smoke machines and infrared thermography (IR), each of which can be executed to aid in identifying areas of air infiltration. It is often the case that the most prolific areas of air infiltration occur at window perimeters, floor to wall transitions, and wall/ceiling penetrations.

Building retrofits are an option that should be considered by many owners to extend the service life of existing facilities, as opposed to new construction. Renovations that involve the repair or replacement of the building exterior offer a great opportunity to perform thermal and air-tightness upgrades to the building enclosure. Diagnostic methods, such as blower door testing and infrared thermography, can help identify existing building enclosure deficiencies, as well as quantify the enclosure performance of a newly retrofitted building. Performing both pre- and post-retrofit testing can provide valuable information regarding the success of the retrofitting upgrades, in addition to which area(s) of the facility may be considered for future retrofit upgrades.

New Hampshire Town and City Magazine - March/April 2021
The 2021 Legislative Session
Municipal Asset Vulnerability and Climate Resiliency Considerations when Developing Your CIP
What Exactly Do Hydrogeologists Do for Municipalities?
Energy Improvements to Existing Buildings
LEGAL Q&A: Municipal Official vs Municipal Employee: What is the Difference & Does it Matter for Compensation & Personnel Policies?
NHARPC CORNER: Regional Planning and Coordination are Critical to Addressing New Hampshire’s Housing Crisis
HR REPORT: Preparing for the End…Work in the Post-Pandemic World
TECH INSIGHTS: Why Strong Passwords Aren’t Enough – 3 Tips for a Better Password Policy
NLC REPORT: Exploring State Interference Before, During, and After the Crisis