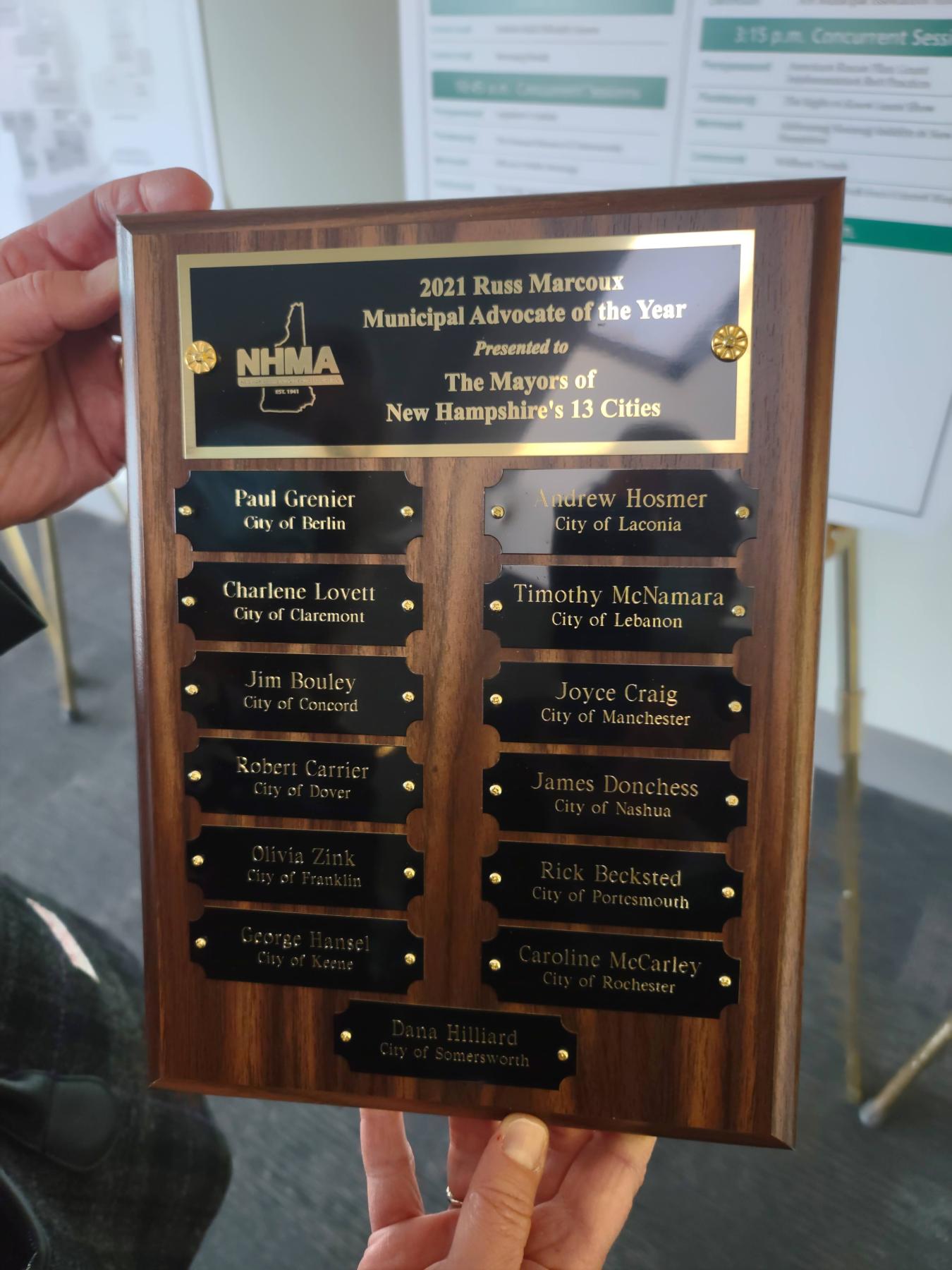 The 2021 Russ Marcoux Municipal Advocate of the year award was presented at NHMA’s annual membership meeting, held on November 17 in conjunction with the NHMA Annual Conference in Manchester.

NHMA’s Government Affairs Counsel, Cordell Johnston, recounted the history of the award: it was initiated in 2011 by NHMA staff as an incentive and a recognition for a local official who had made extraordinary effort in advocating on legislative issues affecting local government. The staff decided in 2011 to give the first award to Bedford town manager Russ Marcoux.

Johnston explained that Russ had been a model of municipal advocacy, following legislation carefully, talking regularly to his legislative delegation, and frequently coming to Concord to testify before legislative committees. Most of all, he exhibited the “appropriate level of moral outrage” toward some of the legislation proposed every year. Sadly, Russ became ill shortly before the 2011 Annual Conference and died a few weeks later, never knowing that he had been chosen for the award.

In his honor, NHMA decided the following year to name the award after him. It has been given every year since then (other than a break in 2020, when the legislative session ended abruptly before it was half over) to a local official who exemplified the Russ Marcoux tradition.

NHMA Executive Director Margaret Byrnes presented this year’s award to the mayors of New Hampshire’s thirteen cities. Although the award is traditionally given to one individual, Byrnes explained that the mayors had taken the initiative to start meeting monthly over a year ago to discuss various issues, including legislation, and to collaborate on advocacy efforts. They worked on everything from the state budget to municipal immunity to housing to the Right-to-Know Law. Their efforts most likely made the difference in defeating several bills that would have harmed municipalities significantly. The group was also active in communicating with New Hampshire’s congressional delegation on issues related to COVID-19 and federal funding.

Byrnes stated, “Nothing is more powerful than advocacy that comes directly from our members, and this group showed that municipal issues are shared between large and small communities. In doing so, they truly exemplified the mission and purpose of NHMA and the power of advocacy through a shared voice.”

Accepting the award on behalf of all the mayors were Mayors Charlene Lovett of Claremont, Jim Bouley of Concord, Joyce Craig of Manchester, and Rick Becksted of Portsmouth. Also named in the award were Mayors Paul Grenier of Berlin, Robert Carrier of Dover, Olivia Zink of Franklin, George Hansel of Keene, Andrew Hosmer of Laconia, Timothy McNamara of Lebanon, James Donchess of Nashua, Caroline McCarley of Rochester, and Dana Hilliard of Somersworth.