Celebrating and Increasing Women Serving Our Towns and Cities

The New Hampshire Women’s Foundation celebrates the women serving their town and cities as elected officials amid so many challenges and opportunities. We celebrate the robust history of women in municipal office and we are grateful for the women stepping up to serve their communities now to build strong, vibrant communities.

However, there is a significant gender gap in elected representation for women at the local level. In 2021, only 35% of city councilors or alderpeople and 22% of town select board members were women. Across the political spectrum, we hear about the importance of gender and racial diversity on the Supreme Court, in the White House, and the Senate, but it’s just as important to have diversity in our town and city governments too.

Studies have proved that, Democrat or Republican, when women serve, they are more likely to support policies that support women and girls in their community. Research shows women in elected office are more likely to seek bipartisanship and compromise than their male counterparts. From government to business to community, a diversity of perspectives leads to more robust discussion and includes more perspectives that lead to better outcomes. It is especially important to achieve gender representation for women on select boards and city councils, since they serve as the executive branch at the local level and have significant influence over the functions, budget and operations of the town.

The NH Women’s Foundation released two reports on women’s representation in 2021 on Women in NH City Government and Women in NH Town Government (including school board). You can access them here: https://nhwomensfoundation.org/our-impact/research/gender-matters/

When we researched the town data in 2021, we found that women’s representation varies across the state with women serving on select boards at much lower rates than they serve on school boards. When the data was collected in 2021, 41% of towns had zero women on their select board. We look forward to comparing the data after all 2022 town meetings and elections.

The NH Women’s Foundation would like to thank the NH Municipal Association for their support and collaboration to help us collect gender data on NHMA members so we can continue to offer data and track progress on women’s leadership in New Hampshire. Keep an eye out for the email survey coming in May/June! 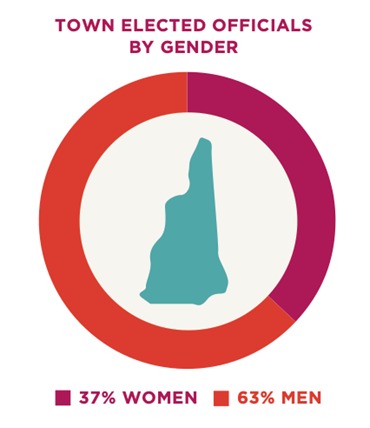 Studies show that women often do not see themselves as potential candidates for office, even though, when they do run, they are just as likely as men to win. Women may assume they are underqualified even though they are as qualified as other candidates. Women are more likely to run for office when they are asked to run/serve and when they are encouraged. If you’re a woman in office, does this resonate with you? What did it take to make the decision to run? For the men who want to support women in office, can you think of women in your community who would be excellent public servants? Will you ask them and encourage them to serve? How about a woman who is already serving - can you encourage her to run for a higher position?

Women, particularly younger women, also point to career, family, and other responsibilities as barriers to serving. If you’re looking to support women serving their cities and towns, ask if they need childcare! See if you can fill in for one of their many other roles to free up time to serve locally.

In response to this data and the voices of women across the state, the New Hampshire Women’s Foundation created the Women Run! program, a nonprofit, nonpartisan program to encourage and train women to run for office, regardless of their political affiliation. We offer a community of women who are serving or thinking about serving some day to share their hopes, challenges, and support with each other. You can sign up for our listserv here: https://nhwomensfoundation.org/womenrun/

Devan Quinn (she/her) is the Director of Policy at the New Hampshire Women’s Foundation, overseeing research, policy, and advocacy programs.  Devan can be reached at devan@nhwomensfoundation.org or by phone at 603.226.3355.

Article Topics:
democratic governance
diverse
elected officials
New Hampshire Town and City - May/June 2022
A Message from the NHMA
Celebrating and Increasing Women Serving Our Towns and Cities
Parks and Recreation Departments are the Fabric of our Communities
The Role of Parks and Recreation in Emergency Management, Disaster Preparedness, Response and Recovery
Tips for Investigating Racial and Other Bias Complaints
LEGAL Q&A: Spring into Background Checks
RIGGINS RULES: Suggested Do’s and Don’ts for the Conduct of Public Hearings and the Deportment of Chairmen and Members of Boards, Commissions and Other Bodies
NHARPC REPORT: RPCs Use SADES Modules to Assist Towns in Assessment of Roadways, Culverts, and Sidewalks
TECH INSIGHTS: How to Best Leverage Your Municipality’s Social Media Accounts
NLC REPORT: Leaders Who Authentically Embrace Diversity, Equity & Inclusion Believe These 8 Things