The Do's and Don'ts of Electioneering Webinar 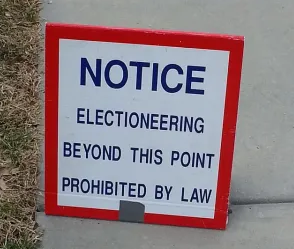 Every state has some form of restriction on political activities near polling places when voting is taking place. These restrictions usually include limiting the display of signs, handing out campaign literature or soliciting votes within a pre-determined distance of a polling place. Beyond the polling places, however, electioneering also restricts certain activities municipal officials may carry out in order to persuade people to vote in an election.

Join NHMA’s Legal Services Counsel, Stephen Buckley, who will cover: Electioneering at Polling Places (RSA 659:43); Electioneering by Election Officials (RSA 659:44); and Electioneering by Public Employees (RSA 659:44-a). Particular attention will be paid to the limitations on government actors, town officials and town employees, when using government equipment and communication channels, such as websites and social media, to advocate for approval of warrant articles and budgets at town meeting.

This webinar is open to all members of the New Hampshire Municipal Association.