Each year, the Russ Marcoux Municipal Advocate of the Year award is given by NHMA staff to a municipal member based on their interactions with officials during the legislative session. NHMA established this award in 2011 to recognize an elected or appointed local official for his or her non-partisan contributions toward the advancement of NHMA's legislative policy goals and for the advocacy of municipal interests generally.

In 2011, NHMA staff selected Russ Marcoux, Town Manager in Bedford, as the first-ever recipient of the Municipal Advocate of the Year award because Russ did all the things NHMA wants members to do in support of its legislative policy and to enhance the success of its legislative agenda.   Russ passed away just days before the 2011 Annual Conference and he never knew NHMA had created such an award or that he had been selected the first recipient. In his honor, the award was renamed the Russ Marcoux Municipal Advocate of the Year award.

At its annual conference last week in Manchester, NHMA recognized Ken Robichaud, Town Administrator in the Town of Northfield, with its 2022 Russ Marcoux Municipal Advocate of the Year award.

In his presentation remarks, NHMA Government Affairs Counsel Natch Greyes recognized Robichaud for always being there for NHMA.  Greyes noted that NHMA “is very fortunate to have a great network of members who work closely with our Government Affairs team which brought us legislative success last session.”   But there is usually one or two members who go “above and beyond” this call of service to help out the team in many different ways.  Whenever Greyes would call Robichaud to help, Ken would always go “above and beyond” in his efforts.  “Of course I’ll help, said Robichaud, “Let me call the committee chair now and count me in to testify on the bill.  And I know of someone else who should also testify on this bill and I will make sure he is there to testify with me.”   Whether testimony at a legislative hearing, a phone call to his legislator(s), or help during the committee of conference process, Ken was always there for NHMA,” said Greyes. 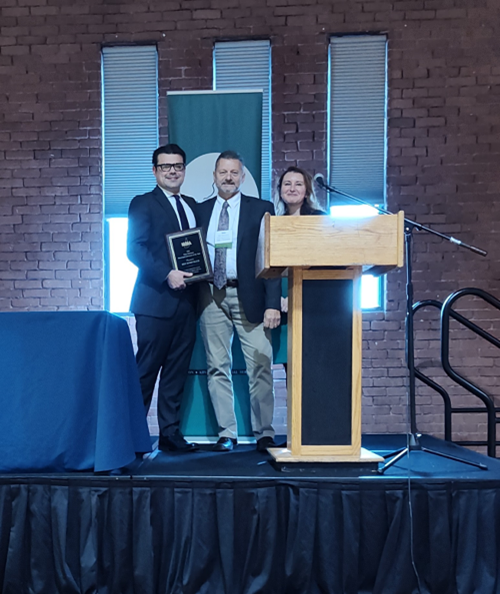 Congratulations, Ken, for your well-deserved recognition and for all your hard work during the most recent legislative session.

Past recipients of this recognition are: