The Top Ten Things You Should Know About Town Meetings

1.) The Moderator Presides and Can do What it Takes to Maintain Order

The town meeting's business is regulated by the moderator, and under RSA 40:4 she has the duty to preside and regulate the meeting and set rules of procedure.  No specific form of parliamentary procedure is required.  Robert’s Rules of Order is not compulsory.   The moderator is merely a facilitator to enable the voters to take orderly joint actions.

It is illegal for the moderator to preside in such a way as to make it impossible to overrule his/her rulings.  Any moderator or presiding officer who willfully neglects or refuses to follow any rule or proceeding established by RSA Chapter 40 or the vote of the town, including any vote to overrule the moderator, is guilty of a misdemeanor. RSA 40:6.

No person may speak during the meeting without permission of the moderator, nor may anyone speak when any person already speaking is in order. 40:7.  The moderator may command any constable, police officer or legal voter of the town, to remove such disorderly person from the meeting and detain any person conducting himself or herself in a disorderly manner. RSA 40:8. Everyone “shall be silent at the desire of the moderator, on pain of forfeiting $1 for each offense, for the use of the town.” RSA 40:7. State v. Dominic, 117 N.H. 573 (1977).

RSA 39:2 states that “the subject matter of all business to be acted upon at the town meeting shall be distinctly stated in the warrant, and nothing done at any meeting, . . . , shall be valid unless the subject thereof is so stated.”  Voters can change the dollar amount of an appropriation, all the way to zero.  Voters cannot change the subject matter of the warrant article such as changing the purchase of a fire truck to buying a backhoe.  Warrant article amendments that seek to name agents to expend from a Capital Reserve Fund or Expendable Trust Fund are also prohibited. It is also prohibited to amend an article to make it “special” or “non-lapsing."

Petitioned warrant articles have no special status on the warrant and are subject to amendment, within the bounds of RSA 39:2, just like any other warrant article. Except where the wording of a question is prescribed by law, all warrant articles, including petitioned articles, may be amended. As previously mentioned, however, amendments must relate to the general subject matter of the article and may not eliminate the subject matter entirely. Adding the word “not” to make an article negative is also a risky move and is not advisable.

4.) Voters Can Ask For A Secret Ballot on Any Question

There are two ways for the voters to request a secret written ballot at town meeting: (a) Any 5 voters can make the request in writing to the moderator before a vote is taken, (if the town’s population is less than 500, it only takes 3 voters) or (b) After a vote has been taken and declared by the moderator, any seven voters can orally request the vote to be taken again using a secret written ballot, but the request must be made immediately, before the meeting moves on to other business (RSA 40:4-a and 40:4-b). 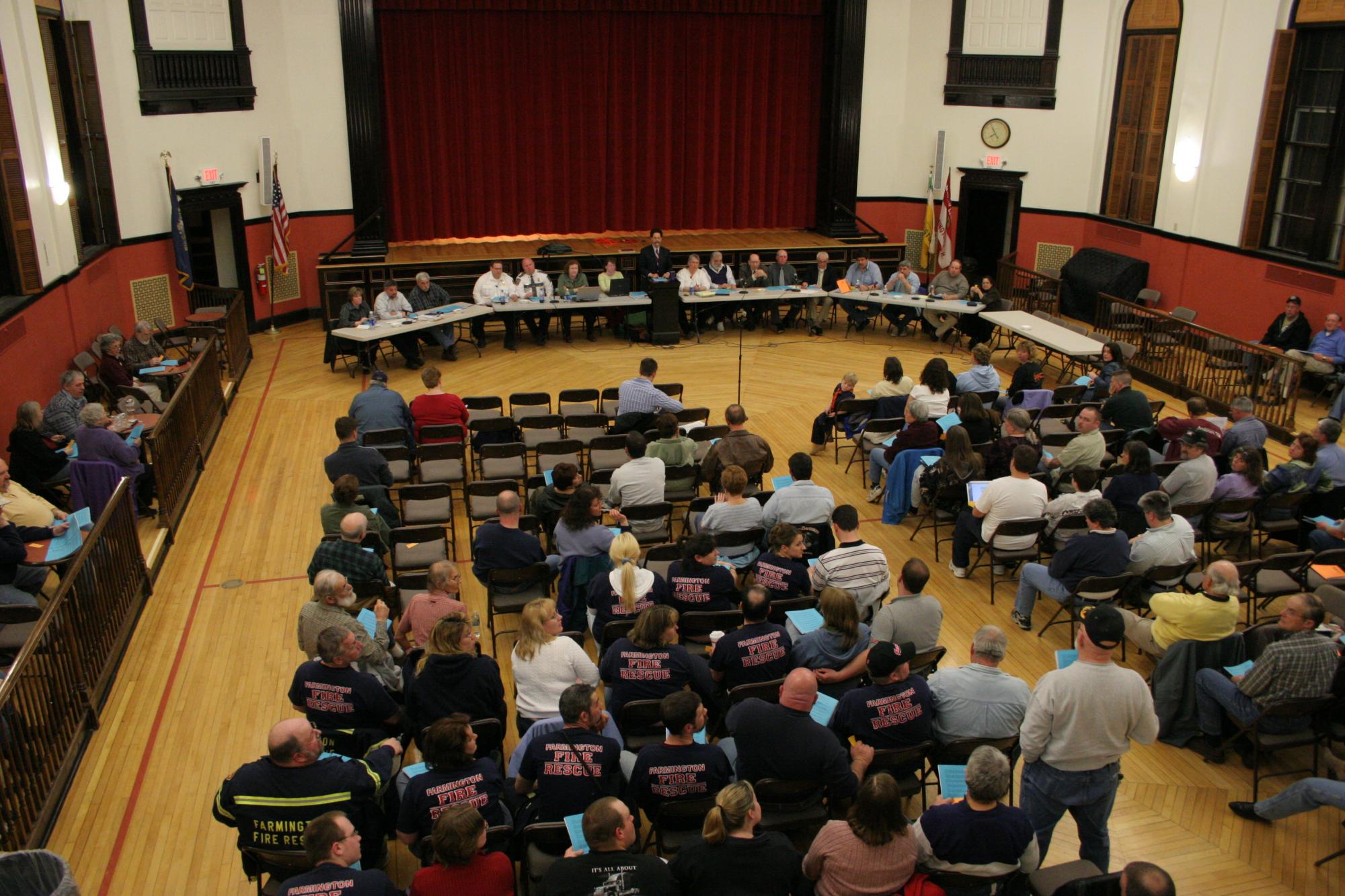 5.) Any Vote Can be Reconsidered Until the Meeting Adjourns

Generally, any vote taken by a town meeting may be reconsidered and/or rescinded later at that same meeting (or at a recessed session of the same meeting).  However, a vote that is required to be taken by official ballot cannot be reconsidered on the floor at a later business session. McDonnell v. Town of Derry, 116 N.H. 3 (1976). There are two important exceptions to this ability to reconsider town meeting votes:

RSA 33:8-a requires that a vote on the issuance of bonds or notes over $100,000 cannot be reconsidered at that same session. If there is a motion to reconsider and it passes, actual reconsideration must take place at an adjourned or recessed session of the meeting held at least seven days later. Notice must be given in a newspaper in circulation in the town at least two days before the reconsideration vote.

6.) Town Meeting is Subject to the Right-to-Know Law, RSA Chapter 91-A

RSA Chapter 91-A applies to town meeting.  RSA 91-A:1-a defines "Governmental proceedings'' as “the transaction of any functions affecting any or all citizens of the state by a public body.”  A "Public body'' is defined as any legislative body which of course includes a town meeting. Consequently, when town meeting convenes any members of the public can attend, including non-residents. Any persons attending town meeting are also permitted to use recording devices, including, but not limited to, tape recorders, cameras, and videotape equipment.

7.) Town Meeting and the First Amendment

In Curnin v. Town of Egremont, 510 F.3d 24 (1st Cir. 2007), the Court held that a New England town meeting is not subject to forum analysis at all. ''The registered voters who speak and vote at Egremont's town meeting do so in their capacity as legislators. Since they are not registered voters, the Curnins are not legislators. Non-legislators have no First Amendment right to address sessions of deliberating legislative bodies." It is up to the moderator and the voters to decide whether a nonvoter may speak at town meeting.  Those who are permitted to speak may employ symbolic speech, and the regulation of expressive conduct must be content neutral and can only employ reasonable time, place and manner principles. 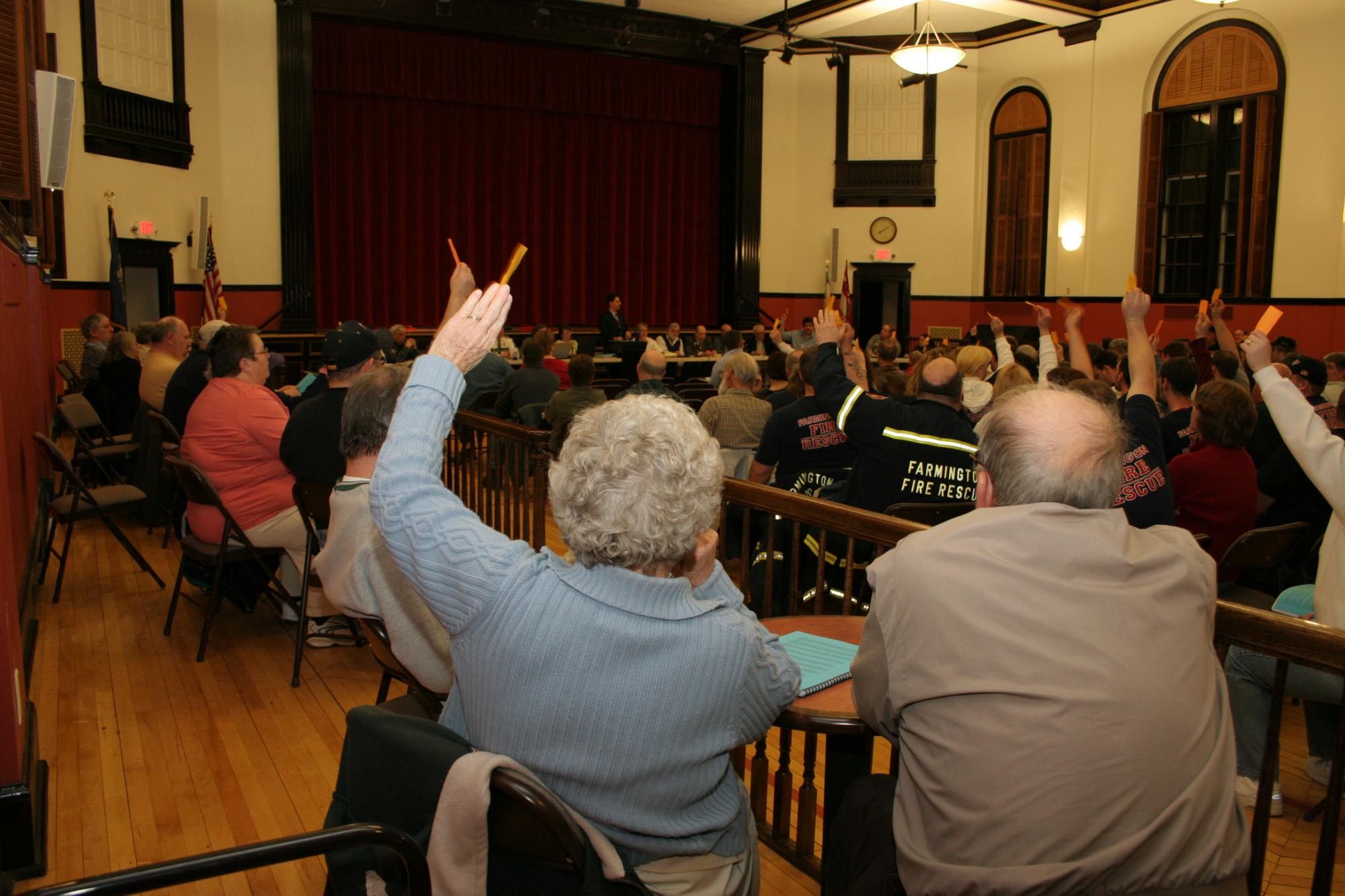 The narrow definition of “purpose” under the no-means-no rule is “a line on the budget form posted with the warrant, or form submitted to the department of revenue administration, or an appropriation contained in a special warrant article.” RSA 32:3, V. In simple terms, this refers to the “big” line items on the NHDRA form, not “narrow” line items in a municipality’s or school district’s detailed chart of accounts, which is often used by the budget committee to create the budget. If a voter moves to amend the budget to eliminate spending for overtime in the police department budget this would only be deemed to be an amendment of the bottom line of the budget and would not bar spending for overtime for the police department.

Under RSA 39:2-a, II, known as SB2, towns/districts can adopt the official ballot referendum form of government via RSA 40:12 - :15.  This also employs two sessions of town meeting, a deliberative session where all warrant articles are discussed, debated and amended, with no final votes taken until the second or voting session where all warrant articles are voted on by official ballot at the polling place.

Stephen C. Buckley is Legal Services Counsel with the New Hampshire Municipal Association.  He may be contacted at 603.224.7447 or at legalinquiries@nhmunicipal.org.