Despite immense challenges municipal governments have faced in the last two years, the state of America’s cities is strong, according to the National League of Cities’ 2022 State of the Cities report, released in June.

In the wake of the pandemic, cities have reopened and are rebuilding with the support of unprecedented federal funding from the Bipartisan Infrastructure Law (BIL) and the American Rescue Plan Act (ARPA).  These opportunities are reflected in mayoral priorities this year as cities are finally able to plan the ways the an repair outdated infrastructure and spur economic development. 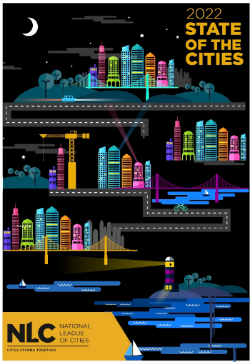 This year’s State of the Cities report, which highlights the top ways cities plan to use their BIL and ARPA funding to revitalize and reinvest in infrastructure and transportation, equitable grown their local economies, and take new approaches to address public safety, among other priorities.

The State of the Cities 2022 delves into the key areas that mayors nationwide are focused on in their cities. Local governments are working hand-in-hand with the federal government to help cities build back in a more equitable, forward-facing direction. The once-in-a-generation level of support provided to cities through ARPA, tied together with the passage of the BIL, is having an incredibly positive impact from the unprecedented impacts of the pandemic.

For nine years, the National League of Cities has released its State of the Cities report. This research, which examines mayoral state of the city speeches delivered between October 2021 and April 2022 provides a clear and consistent voice about the current priorities of local leaders. This year is no different. Armed with a fresh infusion of funding from the federal government, our Nation’s cities are ready to get to work.