New Hampshire’s public airport system consists of 24 public and private use airports. These airports range from Manchester-Boston Regional Airport, New Hampshire’s largest public airport handling the majority of New Hampshire’s commercial airline service on its 9,250’ paved runway, to Colebrook Airport, with a 2,450’ grass runway. Not only do these local airports serve as an important infrastructure (particularly in times of distress); they also serve as public gathering places, family activity centers, and are an economic engine for tourism and businesses. 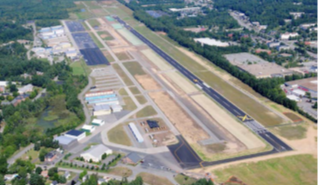 New Hampshire relies on its local airports as staging areas for the National Guard, Red Cross, and other non-governmental organizations that deliver vaccines, food, clothing, or evacuate people to safety. Whether it is a pandemic or a natural disaster, these local airports connect people living in New Hampshire to the rest of the world. 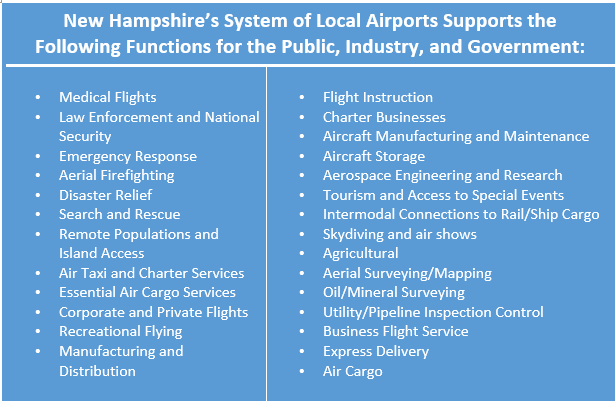 New Hampshire is already an attractive state for business. Without a personal income tax, our state is among the best places for business owners to call home. Since 2019, the State has passed two bills that could attract even more businesses and aircraft to base their operations in New Hampshire. These two bills are:

The aviation industry provides many economic benefits for New Hampshire:

Consider that the FAA contributes 90%, New Hampshire contributes 5%, and Airports contribute 5% to all eligible airport improvement projects. The FAA has calculated that for every project dollar spent by FAA, $7 in economic output is generated in the local, regional, and state economies. This level of subsidy by the FAA is a great deal for New Hampshire.

In short, the New Hampshire system of airports is significant infrastructure that should be valued and maintained.