Former NHMA Government Affairs Counsel, Cordell A. Johnston, received the prestigious Outstanding Service in Public Sector/Public Interest Law recently from the New Hampshire Bar Association. Nominations were reviewed and considered by the Public Sector/Public Interest Award Committee, comprised of members of the public sector/public interest legal community in New Hampshire, and appointed by the NHBA Bar President and Bar Officers. The Committee of six contained a diverse representation of PS/PI practice, including the various sectors such as local, state and federal government, prosecution and defense, and public interest.

The award recognizes an individual’s or an organization’s exceptional contributions and achievements in one or more of the following areas:

▪ Outstanding legal contribution as a public sector or public interest lawyer or organization, which contribution can be in the area of advocacy, public policy, scholarly contributions, education or legislation;

▪ Outstanding mentorship contribution to public sector/public interest lawyers through sharing knowledge, experience, skill and commitments with students or other lawyers. 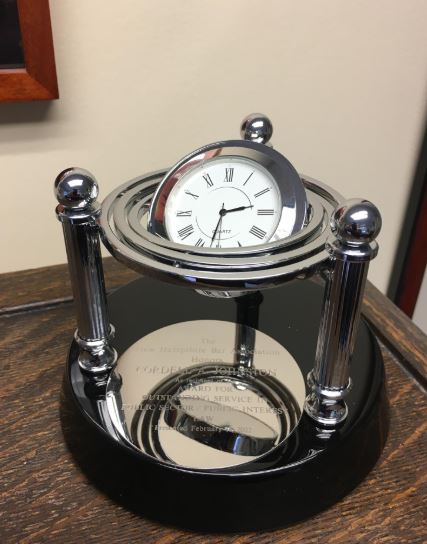 In selected excerpts from the nomination letter offered by NHMA, the staff simply amplified what is now Cordell’s legacy:

“Cordell has functioned as the face of local government at the New Hampshire statehouse for nearly two decades, and he has had an outsized impact on the legislation advanced there. His testimony on the effects of various bills has greatly shaped the formation of the law as it pertains to municipal functions, and he has been involved in crafting reforms to laws that affect every aspect of local government.

Over the course of his nearly two-decade career advocating for New Hampshire's 234 municipalities, Cordell has taken time to serve on the planning board, select board, and currently as the moderator in his hometown, Henniker. Using his knowledge of local election procedures and town meetings, Cordell has led the effort to address the election and town meeting issues that have arisen - from snowstorms to pandemics. Throughout, he has been instrumental in ensuring that municipalities continue to have the resources they need to quietly provide the services that their citizens expect. Most importantly, he has been instrumental in maintaining and nurturing citizen directed, self-government.

Along with this summary of Cordell's outstanding commitment and service to local government and outstanding contributions to legislative advocacy on behalf of local government, we would further offer examples of Cordell's sharing his knowledge with members of the public and other attorneys. Cordell has contributed numerous articles to NHMA's publication, Town and City, on a wide variety of municipal law subjects. He was the prime editor and author of NHMA's Legislative Bulletin, a weekly publication issued every Friday when the New Hampshire Legislature is in session. Without a doubt, Cordell's insightful summary of the week's legislative business affecting municipalities was, and still is, the indispensable guide for our members on pending legislation.

Cordell's legacy with NHMA is legendary. His devotion to NHMA and our membership has been the hallmark of Cordell's time with NHMA. During legislative sessions, Cordell always maintained a 24/7 approach to his work. He always placed the needs of our membership and the Association first. He is leaving a legacy of devoted commitment to the legislative success of this Association and has set the bar high for those who will follow him.”

“Despite our different perspectives, I've found Cordell always to be consummately professional and collegial as we've worked to iron out our differences and to find the "middle way" of compromise that serves both interests. For years, I've witnessed his testimony in legislative committees, where he has gracefully guided the deliberative process with expert knowledge and well-timed dry wit. Cordell and I have also presented together to audiences of municipal officials, and so I've seen firsthand the high esteem in which they hold him. Cordell possesses an innate ability to communicate complex legal principles in an easily relatable manner to a lay audience. In short, he has been an invaluable source of knowledge for volunteers and professionals involved in New Hampshire's local governments.

As Cordell approaches his retirement from the New Hampshire Municipal Association, I find myself feeling a profound sense of loss. While no one is irreplaceable, Cordell comes as close to that as anyone I've known. It is difficult for me to imagine another person with whom I will have such rich debate over the nature and impact of law and whose demeanor will allow me to see the other side so easily. His service to the public has been truly outstanding.”

“Representing municipal interests before the State Legislature in New Hampshire is a daunting process as towns and cities are required to fund most of its services through the local property tax. With the Legislature oftentimes seeking to impede the use of these funds at the local level or attempting to downshift responsibilities to municipalities, we rely upon Cordell and the advocacy team at NHMA to identify legislation adverse to local taxpayers, marshal the resources of local elected and appointed officials necessary to testify and coordinate presentations before various legislative committees.

As I enter my 40th year in local government here in New Hampshire, it is comforting to reflect that during almost half of my tenure, Cordell has supported and contributed to the well­being of our cities and towns. And I'll miss those Sunday morning emails Cordell would send when the Legislature was in session reminding us of upcoming hearings and requesting assistance as we all strived toward achieving our common goals. I cannot think of a more deserving person to receive this award based upon Cordell's knowledge, communication skills, dedication, and perseverance.”

Cordell has strategically guided NHMA’s advocacy program through some of the most successful and productive legislative years in the Association’s 80-year history.  Thank you, Cordell, for your 18 years of dedication to improving local government in New Hampshire and congratulations on this prestigious recognition from your peers.