A Capital Improvements Plan is Not Just a Wish List

The preparation and adoption of a Capital Improvements Plan (CIP) is an important part of a municipality’s financial planning and budgeting process. The purpose of the plan is to recognize and resolve deficiencies in existing public facilities and anticipate and meet future demand for capital facilities and the replacement of vehicles and equipment. A plan typically includes all of the anticipated capital expenditures of a town/city, library and school district for the next six-year period. 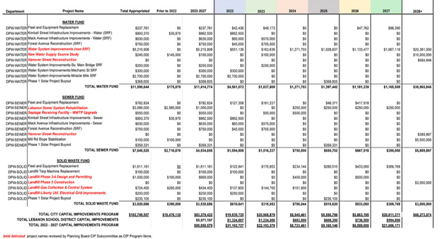 A CIP is an advisory document that can serve a number of purposes, among them to:

Prior to 2013, Bow’s Capital Improvement Plan was prepared by a sub-committee of the planning board. The process typically took only a few hours and the sub-committee only reviewed the new projects that were being proposed. The large bulk of the plan involved the replacement and purchase of trucks, police cars and equipment. The plan did not include an important and integral piece of any good CIP plan including capital projects, construction and renovation of building, bridge replacement, culvert replacement and similar type projects.

A few years back, the town was going to be making the last bond payment on the new high school that was built by the town in 1996.  There was concern that there would be a “mad rush” by the board of selectmen, school board and library trustees to fill the gap with large capital projects utilizing the amount of the annual debt service on the bond to offset the tax impact of the new projects.  As such, there was a need to manage this process and review and prioritize the capital needs of the town. This concern was raised with the board of selectmen and it was proposed that approval be sought at the next town meeting to approve the “alternative” approach for forming a CIP committee. This alternative was adopted in the Town of Pembroke when I served as Town Administrator for that community. In time, the process became a recognized and important piece of the planning and budgeting process. The CIP concept of capital planning became a very familiar document to all and reference to the plan became the norm during board and committee meetings, as well as the annual town meeting. This has proven to be the case in Bow as well.

Bow’s CIP plan includes requests that have been placed in the six-year CIP program for projects exceeding $25,000, spreadsheets of the schedule, funding sources, tax impacts, and other required information. Projects not meeting either CIP criteria or projected six-year window are identified as possible future projects.

There are five steps used to develop the CIP plan in Bow:

First Step: The first step in the process is the collection of project sheets from all departments. The sheets are tailored by the CIP Committee and finance director to generate information that defines the relative need and urgency for projects, and which also enables long-term monitoring of the useful life and returns from projects.

Second Step: A draft of the plan is compiled by the finance director and submitted to the town manager. This provides an opportunity for the manager and department heads to review and discuss the projects and make adjustments.

Step Three: The draft plan is submitted to the board of selectmen for its review and comment before presenting the plan to the CIP Committee.

Step Four: The CIP Committee meets with the town manager and finance director throughout the spring and summer to review the draft and develop the final plan.  Requestors are sometimes asked to come before the CIP Committee, as needed, to explain their capital needs and priorities. The Committee also explores any alternative approaches available to meet the capital needs of the town, including the use of capital reserve funds, bonding, grants, etc.

There are several different financing methods utilized to fund capital projects. Four methods require appropriations; either as part of the town’s annual operating budget or as independent warrant articles at town meeting.

Step Five: Once adopted by the Committee, the CIP is submitted to the town manager, board of selectmen, school board, and library trustees for consideration during the preparation of their proposed budgets.

It must be emphasized that the CIP is purely advisory in nature. Ultimate funding decisions are subject to the budgeting process and the annual town meeting. The CIP Committee brings project requests and needs to the attention of the town’s leaders and citizens, along with recommended priorities, in the hope of facilitating decision making by the town.

A CIP is not just a wish list. In one community, a member of the board of selectmen asked if the plan was going to be shown to the budget committee and the citizens. This selectman was concerned that it would be felt that the town was just proposing large expenditures of funds and searching for ways to spend the taxpayers’ money. That is quite the opposite of why a CIP is formulated and updated each year. The purpose of a CIP is to provide this information in a clear and transparent manner. Over time, the plan is seen as a vital component of the budgeting process and as financially prudent planning for the future.

David L. Stack was appointed as Bow Town Manager in 2010. He has a Bachelor of Arts degree in Political Science from Keene State College and a Master of Public Administration degree from the University of New Hampshire. Mr. Stack is a member of the International City/County Management Association (ICMA) and is also a Board of Director of the New Hampshire Municipal Association and a member of the Municipal Management Association of New Hampshire (MMANH). David can be reached at dstack@bownh.gov or by phone, 603.223-3910.