New Hampshire’s 2021 legislative session begins with “Convening Day” on January 6, when the House and the Senate will each meet to attend to some basic administrative matters. Committee hearings on what are expected to be 800 to 1,000 bills presumably will begin the second or third week in January.

First, the coronavirus is going to make committee hearings and House and Senate sessions very difficult. As this article goes to print in mid-December, we know that Senate committee hearings are going to be held “virtually,” at least at the beginning. The plan for House hearings is less clear, although it is hard to imagine how House committees can meet in person. The use of Representatives’ Hall—where the entire 400-member house meets—for committee hearings has been mentioned, but the House has about 20 committees, and as many as 15 of them could be meeting at any given time. They can’t all meet in Representatives’ Hall. (It’s unlikely that even two committees could meet there at the same time.) We will have to wait to see how this is resolved, but one thing that seems likely is that hearings will be spread out more widely throughout the week, not confined to two or three days, as is traditional.

The other major element of unpredictability is the Republican takeover of both chambers of the legislature. That in itself is not unusual—party control of the House has changed in six of the last seven elections, and control of the Senate has changed in four of those seven. The difference is that this year the number of new representatives seems unusually large, and many of the new Republicans in the House are aligned with the “freedom caucus” that favors a libertarian-leaning agenda. It seems likely that policy disagreements will occur not only between Democrats and Republicans, but between factions within the parties and between the House and the Senate. We have already seen this in the short-lived effort by seven House Republicans to launch an impeachment investigation against the Republican governor and the filing of bills that would end the current state of emergency and limit the governor’s emergency authority.

As in any odd-numbered year, the biennial state budget will dominate legislative activity in 2021, and NHMA will be paying careful attention. We will try to ensure that municipalities receive at least as much meals and rooms tax revenue as in recent years. (Under the law that the legislature keeps suspending, municipalities are supposed to be getting much more.) We will also pursue continued funding for state aid grants to municipalities for water and wastewater projects, and will watch for any efforts to trim highway block grants.

As for non-budget matters, the LSR (legislative service request) titles we have seen lead us to expect a lot of anti-local government legislation, particularly efforts to limit local authority and to micro-manage municipal processes. It is difficult to know what a bill does until its language is published, but the titles suggest that towns and cities will be playing a lot of defense this year. Among many other things, there are bills that tell municipalities how to prepare their budgets, that restrict local regulation of town-owned property, and that limit how much money municipalities can raise. We should know more by January 6, when we present our Legislative Preview webinar, which you can register for on the NHMA website.

Probably more than at any other time in recent memory, it will be essential this year that municipal officials communicate regularly with their representatives and senators. It is going to be a chaotic and contentious year, and NHMA’s staff will be stretched thin to cover everything. Moreover, as we say regularly, legislators pay more attention to their local officials than they do to us as lobbyists.

Some legislators have significant local government experience and a deep understanding of their cities’ and towns’ needs, but many do not. It is important to educate them on why municipalities function the way they do, and that is best done by those who are involved in local government every day.

It is also important that you as municipal officials establish a connection with your legislators before you need to talk to them about a specific bill, so you won’t be making a “cold call” when there is an urgent need to defeat a bad bill (or, optimistically, to pass a good one). We strongly recommend that your municipality’s governing body meet with your legislative delegation in January—and regularly after that—to emphasize your concerns and remind them that they represent the same people you do.

As always, if you have any questions about legislative matters, contact NHMA’s government affairs staff at 224-7447 or governmentaffairs@nhmunicipal.org. 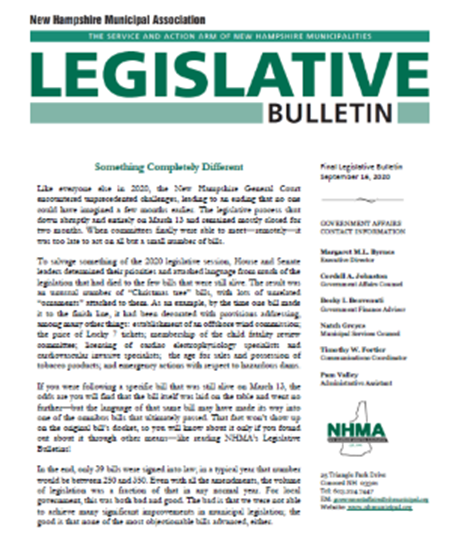 New Hampshire Town and City, January/February 2021
A Nightmare on Main Street – Town Meeting in a Pandemic
Municipal State Aid and Revenue Sharing: Critical Needs Amidst Challenging Budget Times
2020 Annual Member Report
What Can Your RPC Do For You?
2021 Legislative Outlook: Foggy with Storm Clouds
Virtual Town Meetings are More Efficient and Increase Participation
LEGAL Q&A: Practical Considerations for Conducting a Successful Optional Annual Meeting Under HB 1129
HR REPORT: Sanbornize It!
TECH INSIGHTS: A 2021 Cybersecurity Checklist: How Do You Rate Your Organization?