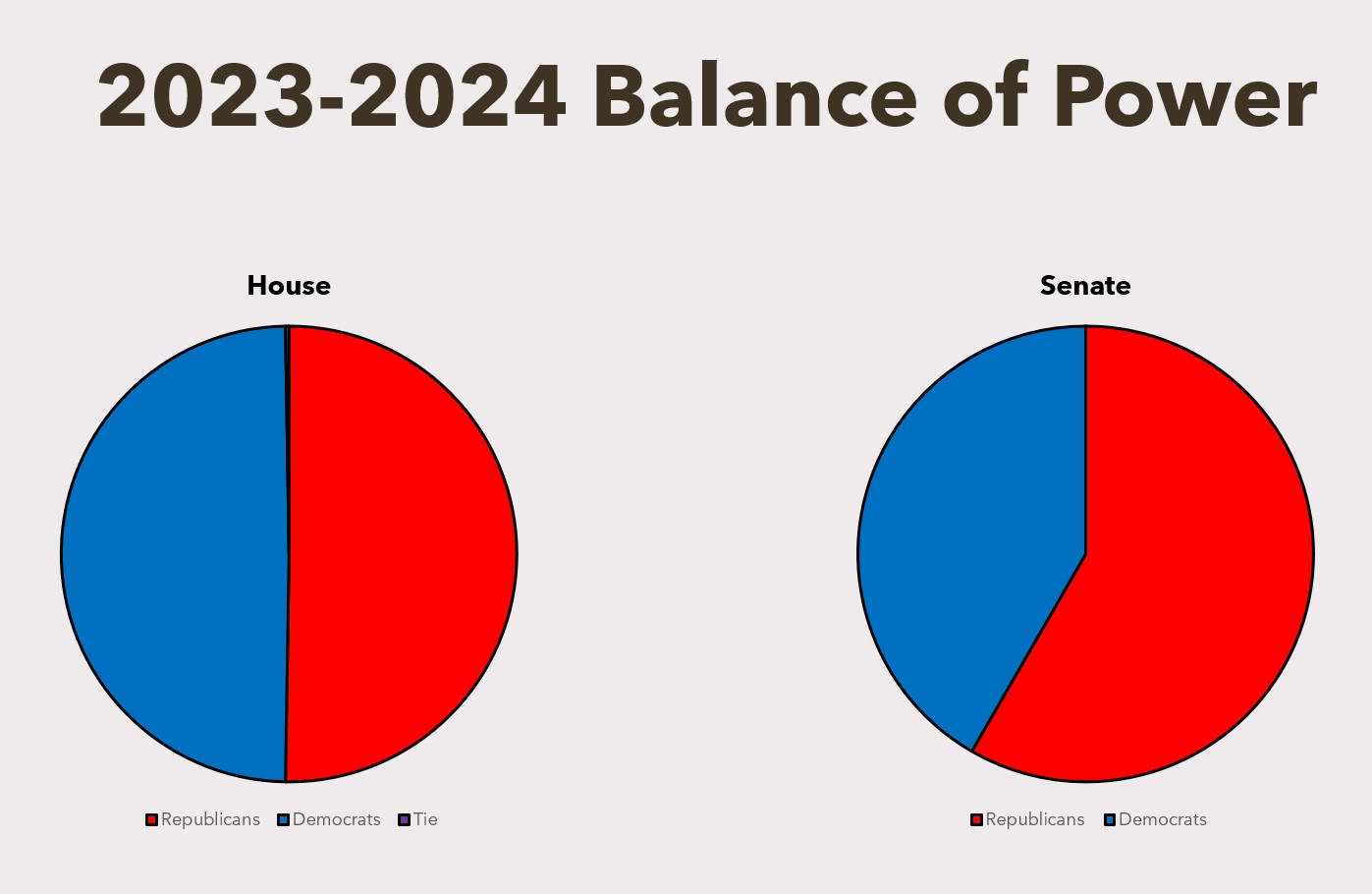 Welcome to the 2023 legislative session!

While the Senate remains 14-10 in the Republican’s favor, the House saw a significant decrease in the numerical differences between the parties. The Republicans hold the slight majority, 201, to the Democrats 198, one of the closest partisan splits in the history of the legislature. One election, in Rochester, ended with a tie. A special election was being recommended by the House to resolve that race. Several Democrats have yet-to-be sworn-in, and one has resigned since being elected. (Rumor is that a special election will be recommended for that seat as well, but we’ll have to wait and see.) Realistically, unless or until the Democrats are sworn-in, the Republicans will likely have a slight advantage on session days, but we could see situations this session where session day results in a Democrat numerical advantage.

It is too early to know whether the partisan split in the House will result in more cooperation between the parties or less. There are some areas – such as marijuana legalization – where we have seen the majority leader and democratic leader agree to cosponsor a bill, meaning that bill will be passed by the House. There are other areas – such as housing – where we have heard significant interest by both parties (including the creation of a special committee on housing in the House), but we haven’t yet seen party leadership coalesce around a specific policy proposal.

In order to keep our members up to date, we are launching a new feature on our website: a live bill tracker. This tracker, run by the software platform FastDemocracy, will enable any visitors to our website to see what bills we’re tracking. It also allows visitors to subscribe to daily or weekly (published Fridays) updates on either all the bills that we’re tracking or specific bill topics. We have organized the bills into topics based on our member-adopted 2023-2024 policy positions. Visitors can also choose to subscribe to individual bills. Subscribers will get updates as things happen – e.g. bills are scheduled for committee hearings, votes, etc. – and updates only on the bills which move forward. Visitors will also notice that we will be adding publicly facing notes explaining what the bill does; indicating NHMA’s applicable legislative policy; and stating our position. As the session progresses and we publish Bulletin articles on point, we’ll also be linking to those articles.  Because we’ll be linking to our live bill tracker in the Bulletin—and because it is crucial that members read it before the upcoming week of legislative hearings and activity—we want to also note that the Legislative Bulletin will be a fully digital publication going forward.

Our goal is to add this information to most of the well-over 200 bills that we’ll be following this year, making FastDemocracy your main source for NHMA’s legislative activity. But our Legislative Bulletin isn’t going anywhere; it will be the vehicle for more thorough, focused information on the most important legislative action happening that particular week. We suggest you subscribe to both!

NHMA is a non-profit, non-partisan, voluntary member-funded and member-governed association established in 1941 by local officials, for local officials. Our mission is to strengthen New Hampshire cities and towns and enhance their ability to serve the public. Through the collective power of cities and towns, NHMA promotes effective municipal government by providing education, training, advocacy and legal services.

Although our Legislative Bulletin serves to inform our members on our advocacy efforts during the legislative session, we’ve been working to transform advocacy into a year-long process through education and information. Whether that’s hosting a webinar with the Office of Planning and Development to explain how new legislation changed certain requirements for local land use boards; partnering with an economist to prepare towns for town meeting and the difficult conversations we expect on the budget this spring (see next article); or educating local officials and legislators on the default budget process (see our article and our webinar), NHMA believes education is the foundation of our advocacy. This is why we encourage local officials to speak with their legislators and invite them to board and council meetings to discuss legislation and policy, how it affects local government, and why NHMA’s policy positions support effective, efficient local government. 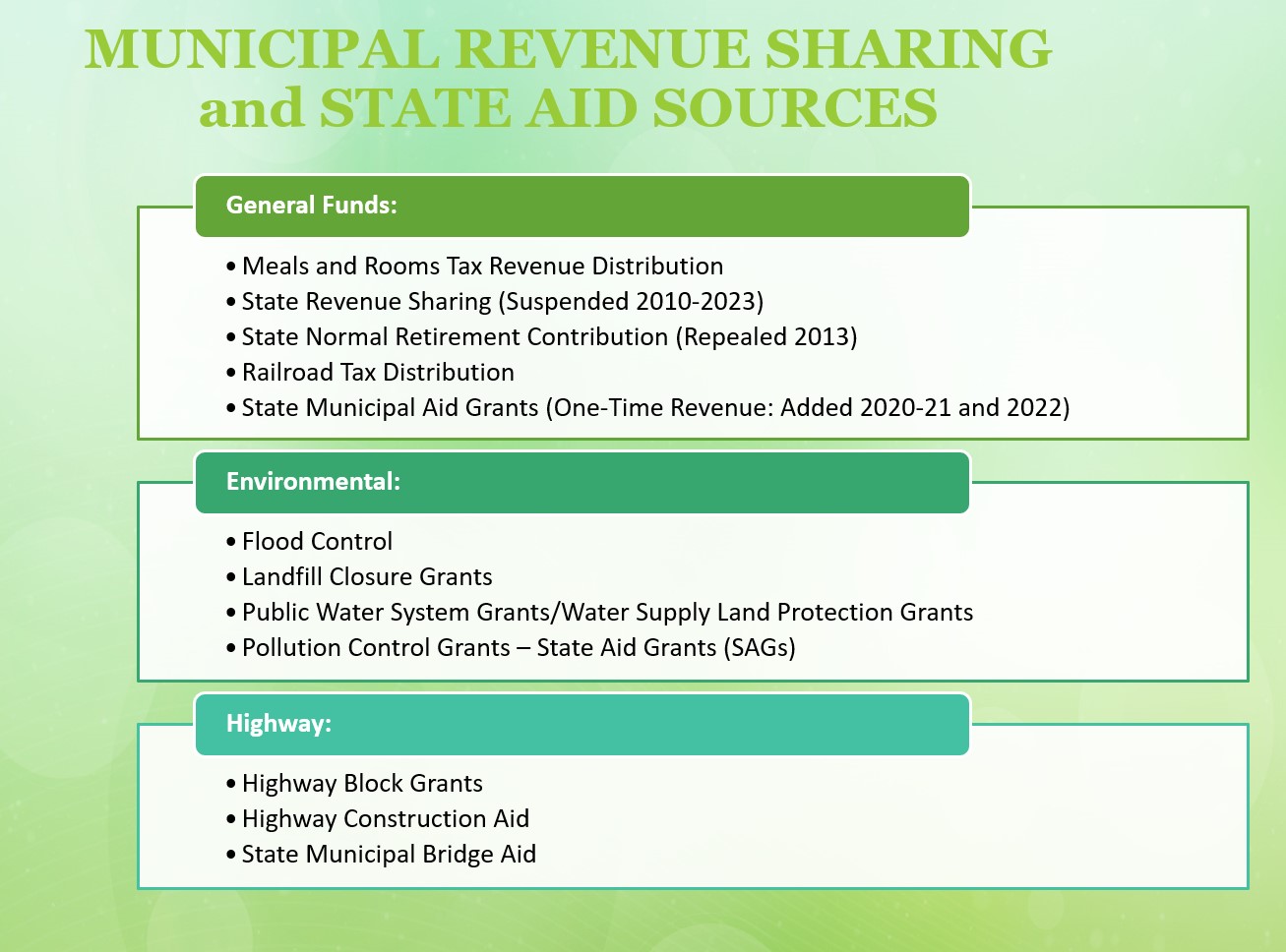 The budget is, undoubtedly, the most important item on this year’s agenda. As we heard from one senator, for the legislature, the budget comes first this year, and policy bills will be playing second fiddle. That said, we are willing to bet that we’ll see a number of policy bills folded into HB 2, the budget trailer bill. We expect that won’t materialize until shortly before the committees of conference in June.

In the meantime, we’ll be working on educating legislators on the importance of existing state funding for municipalities, and, hopefully, making progress on support for new state funding. There are a few bills of particular focus this year:

In talking with House and Senate leaders on both sides of the aisle, we understand that some of these funding priorities may end up incorporated into the budget trailer bill, HB 2, and everything depends on the state’s economic outlook.

The NHMA’s advocacy tool, Municipal State Aid and Revenue Sharing (History & Trends) Booklet, is now available for download.  We strongly encourage our members to review this informative 25-page publication and share it with your local legislative delegation.

In 2021, the State of New Hampshire 2022-2023 biennium budget was adopted during a time of economic uncertainty and a dynamic public health emergency. Even with the help of unprecedented levels of federal stimulus funds, the result was a different budget than had been seen in prior years. State funding cuts were made to the highway block grant and water and wastewater projects, and increases were made to the employer contribution rate in the New Hampshire Retirement System (NHRS). Additionally, the meals and rooms tax statute was amended to require the municipal distribution be set at 30 percent of the actual revenue collected and placed in a dedicated fund—far better than what had been distributed back to municipalities over the past several decades.

During the 2022 legislative session, state revenue was reported at a record surplus of $283.8 million. In response to the surplus, several pieces of legislation were enacted in that non-budget year to provide an additional $106.1 million in direct one-time payments to municipalities. With additional one-time funds from the state for bridges, roads, and wastewater projects; a reimbursement for New Hampshire Retirement employer contribution costs; and, for the second year, an increase in the meals and rooms revenue distribution, municipalities were better positioned to stabilize the impacts of inflation on local budgets and move forward with much needed infrastructure projects.

As deliberation will begin in January 2023 for the 2024-2025 state biennium budget, understanding the impact of state budget decisions on local property taxes will help alleviate unintended consequences on property taxpayers statewide. We encourage all our members to talk with their representatives and senator about the impact state aid has on your local property taxes and municipal priorities.

Below are the rosters for the Senate committees that regularly deal with legislation affecting municipal government. Please make a note if your senator is on one or more of these committees—you may need to communicate with him or her frequently!

The House committee assignments have not yet been completed.

The bill tables and calendars, which we have traditionally published in the Bulletin, will now be available through our live bill tracker,  as described in the first article. The benefit is that members can always have real-time information on bill activity: With a 4-minute delay and automatic updates, the bill tracker will ensure that you know if and when something changes with the bills that interest you.